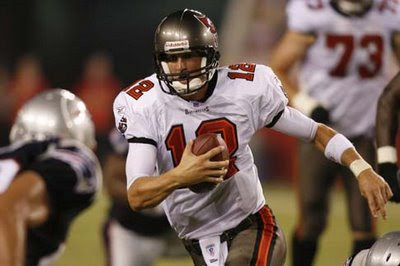 I have been a loud and consistent supporter of Luke McCown as quarterback of the Tampa Bay Buccaneers. Jeff Garcia was the right starter this year, given his leadership to the 2007 NFC South title. But, it looks like the Bucs' brass is agreeing with me (and not with Jon Gruden) that McCown should have been given an opportunity somewhere in the 2008 season to really see with this ultra-athletic guy can do.
With the onset of the Raheem Morris regime, it is the perfect time to give him a legitimate shot to win the starting job, regardless of who else is in the running come training camp. Luke McCown is one of the most athletic QB's you will ever see. Take a little off Steve Young's and Michael Vick's running and you have Luke. Take a little off Tom Brady's or Joe Montana's throwing abilities and you have Luke (OK, the Brady/Montana reference is a stretch at this point). The point is that he has legs and throwing ability, not very often seen and that is why the Buccaneers just made a wise investment in this "kid". Use the force Luke.
Posted by Jeff Carlson at 9:01 PM