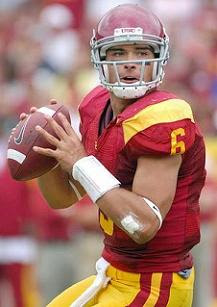 Only a few years back, Alex Smith of Utah and Aaron Rogers of Cal-Berkeley were neck and neck going into the final days leading to the draft. The San Fransisco 49ers did a great job of not tipping their hat to which QB they liked best, but as we all know, they went with Smith and Rogers slipped and slipped down to the Green Bay Packers.
The Niners needed Smith immediately, while Rogers got to sit by while Favre finished up until this past season.
Being the #1 pick is a great thing and it comes with a lot more financial security up-front, but can mean the end of your career more quickly in the long run (Tim Couch).
Mark Sanchez is starting to move up the draft board as time goes on (I'm on record that he is my favorite in this draft). He may not want to make it all the way to the top, because the Detroit Lions are probably more than a rookie QB away from being good.
Matt Stafford has been atop the draft lists for a long time and was recently quoted as saying he wants to play for the Lions so he can throw to Calvin Johnson. I say, be careful what you wish for, it just might come true.
Posted by Jeff Carlson at 4:00 PM

Sanchez will never be taken No. 1. Rather have Culpepper

Jimmy must be a Lions fan. Rather than throw any rookie quarterback to the wolves up there, you should wish for Vick to be signed in exchange for that draft pick. He'll put butts in the seats, sell a ton of jerseys and be more talented on the field and better game-tested than any rookie.