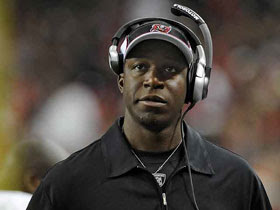 The new coach of the Tampa Bay Buccaneers has made a very bad analogy for the "fight" to be the next starting quarterback of the team. He did it once and I let it go, but now the reference was on the NFL Network and all the announcers were playing with it. Likening the battle that will go down for the QB position this summer as, "one bone, five dogs, let's see who wants it!", is a terrible analogy seeing that former superstar QB Michael Vick has yet to be released from federal prison over dogfighting charges. Morris has already made it very public that he is looking for mean and nasty players for his team and his over-exhuberance will wear thin within a short time, but Roger Goodell may have to step in here and let him know that you can't make that reference anymore.
By the way, although I would like Luke McCown to get the nod as the starter, I think that new first round pick Josh Freeman will ultimately win the job to start the year. Raheem Morris made it perfectly clear that Freeman is his guy all the way. That makes it hard for the players and fans because everyone will be waiting for the team to struggle, so his guy can get a chance to step up and take the bone away from the older dogs. WOOF WOOF!
Posted by Jeff Carlson at 4:56 PM

So we can't talk about [canines] now because Michael Vick improperly treated his dogs. Thanks for the heads up, Der Fuhrer.

I mean reall now, are you the word/thought police too? Cut the PC crap will ya?