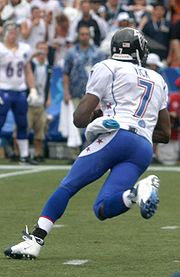 As each day passes and another team is brought into the conversation of possible interest in Michael Vick, I think about what could be with him in their offense. The notion of what he could do out of the "Wildcat" formation seems to be the subject that keeps coming up, but it is what he could do as a receiver in motion that intrigues me.
Ronnie Brown was successful as a running back that could throw a little bit (very little), but with Vick in fast motion towards the QB (in shotgun set) on every play, a quick fake to Vick passing by would freeze most defenders as he races around the left end (with or without the ball). But with Vick's passing abilities, he could stop on a dime and drill passes downfield like no other running back has ever dreamed. So, you keep your top passer in his spot and add a run/pass option guy on every play that opens up everybody else just a little bit and you have an incredible offense.
Now, what team is willing to wade through the public relations hassles of taking on the "circus" (pun intended) of Michael Vick for the sake of a potentially awesome offense?
Posted by Jeff Carlson at 4:46 PM