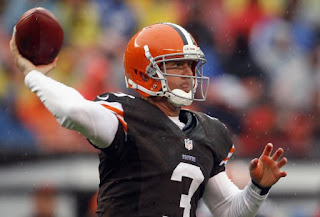 Laying on my couch Thursday night watching Fox News as usual and clicking over during the commercials to another average NFL Network game, I read the scroll at the bottom of the page.  It read something like, "Brandon Weeden will be evaluated in last 7 games to see if he is QB of future", says coach Brad Childress.
My immediate thought was this is why the Cleveland Browns aren't very good.  Maybe the scroll should have read, "Browns coaches will evaluate everything they are doing to help Brandon Weeden succeed over the next 7 weeks to see if they should return as coaches next year."
If Troy Aikman was evaluated on his rookie season, we wouldn't even remember his name today.  If Steve Young was evaluated on his rookie year with the Tampa Bay Buccaneers, even with a nice professional apprenticeship in the USFL, he wouldn't be a Hall-of-Famer.  The quote by Childress is unfair and ridiculous to say the least.
Try what the Cowboys did after Aikman went winless as a rookie and build around Weeden to see what he can become.  From watching him play, I think he can be pretty good--that is if he had a decent coach.
Posted by Jeff Carlson at 9:13 AM