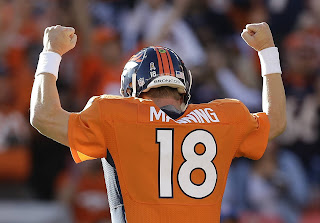 Before Peyton Manning chose the Denver Broncos, I said this was the team that he should go to because it was the easiest road to the playoffs, with the Chargers being the best of the worst the division had to offer.  Beating the Raiders, Chiefs and Chargers to win the AFC West was a much better option than trying to beat Tom Brady and the Patriots if he would have chosen the Miami Dolphins or Matt Schaub of the Texans if he liked the feel of Tennessee.
Playing in the new Mile High Stadium gives the Broncos a real physical advantage as well as a mental one and with his expertise now almost exclusively from the shotgun, they are one tough team to get up on.  Yesterday Manning outmaneuvered the Buccaneers with a fast-paced tempo that kept the Buccaneers in a base look defense on almost every play, but also kept the defense from getting a moments rest between plays.  One time the Bucs tried to make personnel changes and Manning quickly got his team to the line of scrimmage and snapped the ball.  He didn't get the penalty for too many men on the field that he was looking for, so he went to the sideline and got John Fox to call a timeout and make the challenge.  Of course the Bucs were found to have had an extra guy just barely still on the field, but rules are rules and the referees had to give it to him.  It is this kind of mastery that has made Peyton Manning legendary in his understanding and manipulation of the game.
I don't know if the Denver Broncos will be able to wind their way through the playoffs and get into the Super Bowl, but clinching the division on December 2nd is not a bad way to get back in the league after last year's missed season!
Posted by Jeff Carlson at 8:54 PM