Patriots, Belichick Unsure How They Will Use Tebow 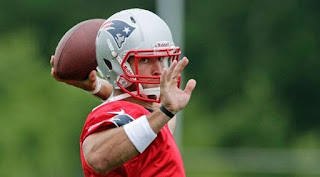 Players find different roles on their teams.  Sometimes a wide receiver becomes a kick-off return specialist and other players that don't find starting roles, find their niche on special teams, but rarely does a team sign or draft a player without knowing what they plan to do with him.  After being on the open market for a number of weeks without a suitor, Tim Tebow signed with the New England Patriots and Head Coach Bill Belichick said he doesn't know where Tebow will fit in.
The common thought is that the Patriots were one of the few places Tebow could go because of their ability to handle players that bring extra scrutiny, albeit the past players brought in had negative associations for their ability to get along.  Tebow gets along quite well it seems, but brings a storm of media no other player in the NFL does.
With Tom Brady entrenched at QB, there is no story to write about Tebow moving in like everyday in New York.  The story is will offensive coordinator Josh McDaniels go out of his way to incorporate him into the offense in a way that will actually make Tebow the terror that he was in college?  Tony Sporano had no plan to integrate him into the offense and the weak effort to run a few spread option plays were pitiful.
Remember back to the beginning of the "Wildcat" with Ricky Williams and Ronnie Brown of the Miami Dolphins.  It was successful first because no one had seen it and it caught teams by surprise.  Secondly, it was successful because defenses were forced to defend two points of attack with two good runners.  The New York Jets could have been a force on offense if they had used Tebow as the Ronnie Brown runner coming in fast-motion across the formation past Brady.  Brady can give it to Tebow on the move to his left in a run/pass option, where the corner is threatened by a 250 pound fullback.  Come up to tackle Tebow and leave the receiver uncovered and Tebow will dump the ball just like he did at the University of Florida.  Stay back and cover the receiver and he will hurt you big-time on the ground.  After Tebow does that a couple of time, Brady fakes it to Tebow and pulls it back out and finds his receivers more open than usual because they had to react to Tebow taking the ball outside.  This offense would actually look a lot like what Tebow was doing with the Gators when he either gave it to Chris Rainey or Jeff Demps (two of the fastest guys on the planet) and pulled it out and ran it or threw it to an open Aaron Hernandez (yes, the Pats TE).  Josh McDaniels made Tebow a first round pick and caused much of this problem, because if Tebow had been a fourth round pick (where his QB ability justified his draft status), there would not have been nearly the expectations that have been on this player that if used properly can actually have the value of his original draft status, just not at the quarterback position!
Posted by Jeff Carlson at 5:29 PM