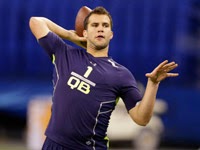 The QB class of 2014 entering this year's NFL draft in May brought arguably more interest than any in recent years, especially with Johnny Manziel participating in the on-filed events except the throwing portion.
Teddy Bridgewater, still thought by many to be the most ready for the NFL, was in Indianapolis for the events as a bystander for the field events, but the other QB getting lots of attention was the lesser known quarterback from the University of Central Florida Blake Bortles.  Unlike Manziel and Bridgewater, Bortles has a prototypical NFL QB body and has a lot of athleticism to go along with it.  The biggest knock is that he didn't play against top-notch competition week in and week out in the American Athletic Conference.
I became a fan of his play as UCF found its way onto the television more often as the season progressed and he certainly showed well for himself in beating Baylor in his bowl game.
I don't think there are any questions with him and his abilities moving onto the highest level.  He is big, strong and athletic.  HIs arm strength is not a question, but his mechanics might be.  Looking at the photo from his combine throwing, he certainly takes the ball way too deep behind his head!  I haven't studied him enough to know if he does this all the time or just certain throws when he doesn't have his legs underneath him.  It can be fixed, but the QB coach that he lands with will need to know how to do it.
For our purposes here, know that the BEST way to throw the football is to keep the forearm vertical to the ground with the throwing hand directly on top of the elbow until the last second when the hand snaps toward the target, more like a boxer throwing a punch than reaching deep behind the head with the football.  This makes it much more difficult to get the ball's nose far enough around to fly properly.  Also, with a helmet and shoulder pads on, it makes it more difficult all around.  This "mistake" in his mechanics wouldn't be enough to stop me from drafting him, but it is a place for him to improve from now until his pro day!
Posted by Jeff Carlson at 9:02 AM