Brett Favre Plays Well--Hurts Self and Another 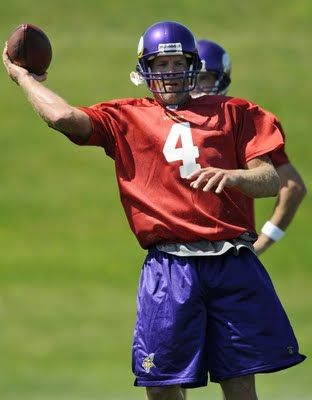 I don't know what anyone on the Minnesota Vikings was thinking by putting a 40 year old man (not named Jerry Rice) out as a wide receiver. Brett Favre seemingly hasn't learned anything heading into his 19th season in the NFL as he cuts an unsuspecting player at the knees and by turning sideways as he does it, ends up injuring his own ribs in the process.
Note to Brad Childress: This is not why you begged this guy out of retirement and also not what you are paying him $12 Million to do.
Favre had a pretty darn good outing in a more extensive showing, leading the Vikings to a preseason win, just keep your head up and off defenders shins and things should go quite well for Minnesota this year.
Posted by Jeff Carlson at 11:10 PM