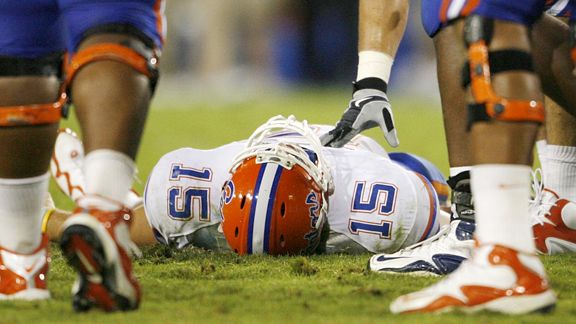 As a fan of the Florida Gators and of Tim Tebow, I got scared (and I assume the rest of you did as well) when Tim "Superman" Tebow laid on the ground motionless after a big hit in the chest sent him back into his own lineman's leg that snapped his head forward and knocked him unconscious.
Just last night, Lakeland High School (six current Gators are from Lakeland) was playing De La Salle out in California and one its players went down, but didn't get up. It was great to see Tebow get to his feet a few moments later, although obviously not all there in his head. He was taken to the hospital for follow-up.
It definitely looked like he was knocked unconscious. How quickly can he or should he return to the Gators' lineup? In similar situations, if a player does not have post-concussion migraines, etc., they usually return the following week.
The Gators have an open week before meeting up with LSU. Let's hope that he is back to his old self quickly. God speed.
Posted by Jeff Carlson at 10:17 PM