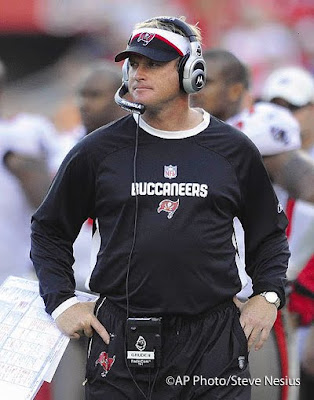 I couldn't wait to see "Gruden's QB Camp" on ESPN this evening. He critiqued Sam Bradford, Colt McCoy, Jimmy Clausen and Tim Tebow on their play this past season, and for Bradford, he had to go back to 2008 to get a look at what he used to do.
Gruden's office is just down the road from my house here on the edge of Tampa, Florida. He is in his element giving each of these great college football players "the business", like Eddie Haskell used to do on "Leave It To Beaver", back in the old days. It is just this kind of good old-fashioned ribbing that could wear on veteran players after a while.
There is no doubt that with all the time he spends behind those closed blinds in that unmarked office building, he really pulls a lot out of the film. I will be honest, this was a very risky proposition for these quarterbacks and I'm not sure I would have exposed my player to this national television show before the draft. I don't think any of them did poorly in their interviews, but didn't think Colt McCoy's accent has anything to do with his future success.
I was glad to see Gruden make a strong point about footwork and not allowing yourself to be lazy. Good, quick and properly placed footwork has much to do with the success of quarterback at every level.
As I have said many times though, there wasn't much mechanics and technique training discussed. Even for the one-of-a-kind delivery of Tim Tebow, basically it was Tebow saying he isn't changing much, but is going to carry it a bit higher. I'm not sure who has told him to keep his balance 80-20 on his legs while waiting for the snap. The truth is that the balance should be basically 50-50 all the way through drop and delivery. The time that it changes is as you are releasing the ball, the back leg pushes all of its balance into the front knee and leg until all 100% goes into the front leg. Tebow still doesn't understand what a good throwing motion is supposed to look like and that is obvious throughout the video. He never extends his arm out to the target. He is always held back with a bent wrist and elbow and will not throw with the power and spin that he should be able to generate.
I also watched Todd McShay and Mel Kiper, Jr. continue to disagree about Jimmy Clausen's value in this draft. I am with McShay on this and will continue to say that he will not develop into a top pro. McShay has Clausen at #38 on his board, a second round pick, while Kiper has him as the #4 guy on the whole board and above Sam Bradford. Kiper is wrong on both counts--big time.
Nothing has been written about Clausen's throwing motion, and ESPN The Magazine even went so far as to put him on the cover with a story about how great his delivery is. It couldn't be further from the truth. He has a very awkward delivery that will also break down, like Tebow's, at the next level. You can quote me on it.
Overall, I enjoyed the Gruden QB Camp, but would have liked to see him get on the field with all four guys and let them rip it!
Posted by Jeff Carlson at 10:22 PM