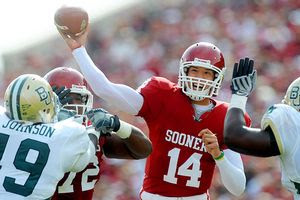 I wanted to get all of the photos that were in this article because they show exactly why I rank the QB's in this group this way:
1. Bradford
2. McCoy
3. Tebow
4. Clausen
The photos show Bradford and McCoy in perfect position, while Clausen and Tebow are caught in their usual awkward or undisciplined positions and that is why I rank them the way I do. Here is what Gruden had to say about them (taken from ESPN.com).

Bradford is a very cool, calm customer. He's huge -- a lot bigger in person than you would think. He's every bit of the 235 pounds and 6-foot-4 size he's advertised. He's very excited about his future and should be. He came to Tampa right from the combine, which was a bit of a grind on him, but he was sharp, alert and asked good questions. You could tell he was eager to learn about the NFL game.


[+] EnlargeJerry Laizure/US Presswire
Sam Bradford's play at Oklahoma should bode well for him as he transitions to the NFL, Jon Gruden says.
At Oklahoma, they run a lot of no huddle and much of the time at the line of scrimmage he was looking to the sideline to get the proper play. He generates a quick tempo, takes charge of the offense and gets great results. I'm impressed with his overall mobility. He can get away from pressure, keep plays alive and can really throw the football.

It's hard to evaluate him on this season because of the injury and the time he missed, but I admire his toughness. He tried to come back when I think he was advised otherwise. He fought and he worked and he tried to be a factor on his team, which was important to him. Unfortunately, early in the Texas game he was hit on a naked bootleg and wasn't able to return. I know that was tough on him.

Bradford has the physical tools to be successful. He played in the shotgun most of the time but he's also been under center. He can throw timing routes to the outside and is mobile enough to get out of trouble. He was a leader at Oklahoma and should make the transition quickly in the NFL.

The guy he reminds me of talent-wise is Vinny Testaverde -- and maybe it's because they wear the same number. Testaverde was a No. 1 overall pick and I saw him play when he came out of the University of Miami. They both have the ability to get the ball out quickly with velocity and to throw on the move. Bradford has a similar stature and he had dominant results much like Testaverde did in college.

For the most part, McCoy played under center the first two years at Texas and the last two years they spread it out and became more of a single-back, spread shotgun team. He flourished in both situations. I saw him practice when I was calling the BCS National Championship Game. He's got a lot of charisma and was a leader for the Longhorns.


[+] EnlargeJohn Albright/Icon SMI
A four-year starter at Texas, Colt McCoy holds the NCAA record for most wins by a starting QB (45).
Texas was a high-percentage passing team this year, so every tape I watched he looked pretty good. At times, he was a little complacent because they had such big leads. I watched the third quarter of the Missouri game, and asked him about a couple of balls that maybe he forced in there, and he agreed. For the most part though, every game was the same.

I tried to watch as much Drew Brees film with McCoy as I could because their overall physical size is very similar (Brees is 6-0, 209 pounds; McCoy is 6-2, 210 pounds). Offensive guards in the NFL are 6-5 today and some of the defensive ends and tackles are also, so he's going to have to create passing lanes at times. McCoy's ability to create in the pocket, to slide move and to throw the ball from alternate arm angles are going to be important, so we watched a lot of Brees in the pocket. We also watched his command and his ability to eliminate wasted plays. Brees is the kind of guy McCoy should try to emulate.


You can't give enough football to McCoy. You can really load up this computer. He can handle it. Though he's athletic, I think above the neck is going to be perhaps the biggest strength of his game, much like Brees, who is always working even when he's resting. McCoy is going to be able to recognize fronts in coverages, he can place the ball on the back shoulder, he's a very accurate red zone passer, he can run and he will compete. His passion for football is as good as anybody's.

Winning is the most important thing to McCoy. He knows the game and is not afraid to take coaching. The team that drafts him is going to get a guy who will continue to improve.

Once he gets in a rhythm and masters the concepts, he's going to throw the ball well enough to be a good quarterback in this league.

Clausen is coming out as a true junior and is the youngest of the quarterbacks I met. We hit the film hard during our time together. He's the kind of guy you have to kick out of your office or he would just stick around forever.


[+] EnlargeKyle Terada/US Presswire
Jimmy Clausen led several comeback wins while at Notre Dame.
He is the all-time leading passer at Notre Dame and he did it in just three years. Joe Montana, Joe Theismann, Brady Quinn -- the Fighting Irish have had a history of great quarterbacks, so his production is astonishing.

Clausen suffered a serious injury early in the season against Purdue and fought through it for multiple games. This wasn't just a mild turf toe as it was portrayed, but was serious enough that it required surgery. The toughness he displayed is a key component in a winning quarterback. It affected his practice time and mobility.

Before the injury, he showed escape-ability. He's been in a check-down audible system. He can throw the ball on the back shoulder. He can put the ball where he wants it and drive it when he has to, and that's important. He does it from the pocket, works underneath the center and in the gun.

I admire how he brought his team from behind to win four times this season, and he helped put them in position to win down the stretch, coming from behind, several other times. At crunch time, he really delivered.

When I look at quarterbacks and see how they play when they are tied or behind in the fourth quarter, that tells me a lot about them. Clausen excelled at crunch time. The statistics speak for themselves and he has shown dramatic improvement every year. He's a polished, confident kid and I like his upside. I think he's really going to work at it and continue to get stronger.

I think Tebow is going to be a tremendous pro. He must continue to work on some of his mechanics, and he might not be a starter right away, but in a very short period of time he's going to be an excellent NFL player.


[+] EnlargeDonald Miralle/Getty Images
Tim Tebow's throwing has been the hot topic as the draft approaches.
The thing that most impressed me was when I talked to him about working on his mechanics, and then he went out to the field and worked them out. That's the area where I saw the most progress.

He told me he was going to shorten his stroke, widen his base a little bit, try to eliminate some wasted motion and I saw the improvements. He's worked at it and has made progress. That tells me he's going to continue to get better because this is really important to him.

Tebow went up against JaMarcus Russell, Matthew Stafford and Bradford, and beat them all. His body of work rivals that of anybody else to ever play college football.

Then you meet him and you start to discover his level of football aptitude, and you realize this is a rare, football-smart guy. He's good for any team, any locker room, any city, and he'll prove it.

There is a perception that the Florida offense doesn't translate to the NFL, but I disagree. I think there are some sequences and some things they've done in the passing game concept-wise that carry over.

He's had a lot of responsibilities at Florida, from the various triple options to audibles at the line of scrimmage. There's also a lot about his game that he shouldn't change, like his ability to extend plays.

The big thing for him is to trust his new coach, buy into the system and not get frustrated with a bad period, a bad practice or a lack of reps initially. He just needs to continue to learn and take advantage of his opportunities.

Tebow is going to be great for the league.