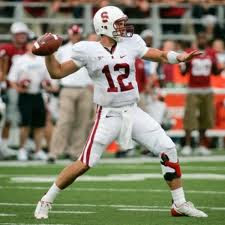 Andrew Luck has been the consensus #1 overall pick in the NFL draft for more than a year now. Last year he decided to do the college thing one more time and Cam Newton took the top spot and the millions that go with it. With the NFL's new CBA following the long lockout, Newton's millions were far less than the previous number one's for quite a few years, so Luck didn't miss out on nearly as much as usual.
He didn't disappoint in the college ranks and continues to be way out in the lead as the front-runner for the Indianapolis Colts come April.
With Newton's success, the mania surrounding Tim Tebow's ascension in Denver and Robert Griffin's Heisman Trophy win, some wonder about changes to the long-held model of the prototype NFL quarterback. While there may be a subtle shift to more athletic QB's at the game's highest level, passers will remain the most coveted, especially as less and less pro style QB's are being developed from Pee Wee to college.
Next to the Manning brothers, Andrew Luck looks to be the most well prepared player to successfully transition to the NFL. Cam Newton may be the most exciting player to watch over the next decade and very well may make the Carolina Panthers a very successful team on the way, but Luck's demeanor and understanding of the game should make him a super solid performer and probably less likely to get injured during the same time frame.
Posted by Jeff Carlson at 10:11 AM