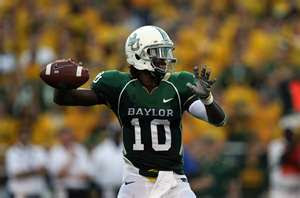 Michael Vick has an MVP trophy and took the Atlanta Falcons to the NFC Championship game early in his career and even got himself back to the top of the league after taking some time off in solitary, but Robert Griffin III, the most recent super-fast QB to hit the NFL, who is just as fast as Vick, a little bit bigger and a more polished QB at this point in his career. Hit potential is off the charts!
Sub 4.4 40's at the combine get scouts and everyone else drooling when the player is a wide receiver or a defensive back, but when it is a QB, it unchartered territory, sans Michael Vick. With Cam Newton's phenonemenal rookie year, offensive coordinators are letting their minds run wild with the options available with that kind of passing and running ability. Newton's Carolina Panthers did not win many games last year, but they are arguably one of the most exciting tickets for next season. RG III could make a lackluster team at the top of the draft, an extremely exciting ticket for next year as well.
Vick, Newton, RG III and Tim Tebow (if Tebow can improve his passing skills and reduce his abusive running style) really are the new breed prototype for the future of the league. I don't ever see the NFL not interested in great pocket passers and I'm not sure Andrew Luck's 4.59 40 make him simply a pure pocket passer or not, but great passers with great athletic ability are certainly the future as well as the NOW!
Posted by Jeff Carlson at 10:14 PM