Josh Johnson Should Be Top Of FA Lists 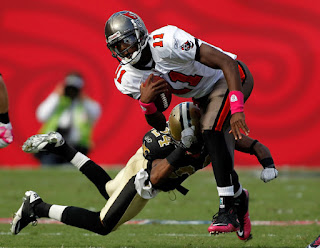 His name hasn't been on the lists of hot free agents, but a weapon that any team could use is Buccaneers QB Josh Johnson. He is 6'3 with 4.4-4.5 speed that can play quarterback and be a "slash" wide receiver, backfield motion guy for special plays. If Peyton Manning chooses somewhere other than Denver to play then Josh Johnson to the Broncos would be their best option for not only having another option for keeping their "Tebow Offense" in place, but have a key weapon for creating more space for everybody, if he was brought in motion and Tebow faked a handoff to him or gave it to him now and then. His run/pass options would be phenomenal! I thought the Philadelphia Eagles could have used Michael Vick in this same capacity in his first year back from prison. It would have created much more room for Donovan McNabb and neutralized the D-Linemen and LB's just enough so that they wouldn't be able to get upfield so fast. Johnson's starting experience and numbers weren't great in Tampa, but that had more to do with the overall state of the Buccaneers offense than anything else.  And when Josh Freeman took over the reins at QB, they only put him in on a couple of run plays from shotgun.  They also threw a deep ball down the sidelines where he had badly beaten the defensive back, but Freeman threw it out of bounds.
The Denver Broncos should have him on speed dial in case they lose Manning and they probably will, since rarely does the team with the first visit actually get the player.
Posted by Jeff Carlson at 5:22 PM