Feast Or Famine For Jets? 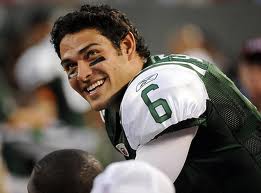 Acquiring Tim Tebow from the Broncos could be a real boon for the New York Jets if used properly, but most likely will become a nightmare before the end of the 2012 season and the coaches and fans will have an equal hand in what could have been a dream for all involved.
If Tebow is used as a motion receiver coming across the formation quickly, causing the linebackers to respect quick pressure on contain, sometimes getting the ball and others simply a decoy, Mark Sanchez and the the New York Jets offense could be very formidable.  But the more likely scenario is taking Sanchez off the field or making him a worthless decoy as a receiver, which will not give them any advantage.
The real debacle is going to be the Jets fans and their reaction to Sanchez when he misses an early pass or two.  There will be a significant amount of fans calling for Tebow to get in there as the regular QB and that will start dividing the locker room and eventually lead to a losing situation for all involved.
Done properly, more Jets apparel and merchandise will be sold than ever before and the on field success will match it, but the more likely scenario is an ugly divorce in the not too distant future.  Then the smiles will be wiped off both of the GQ coverboys' faces.
Posted by Jeff Carlson at 10:52 PM