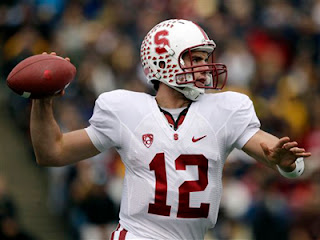 Gruden's QB Camp specials have been entertaining and enlightening the last couple of years and it continues with this year's batch of top-notch quarterback talent.  Recently in the "hot seat" was Stanford QB Andrew Luck, thought to be the most prepared and pro-ready quarterback in many years.
What Gruden pointed out in film study though is that even the best make mistakes, costly mistakes, unforgiveable mistakes.  Gruden showed his star pupil a series of plays called "Spider 3, Y Banana", where Luck fakes a reverse hand-off to the tailback and throws an easy flat route to the "always open" fullback.  He pounded his point home about what the read and progression is supposed to be.  Then he showed him the USC game, where they were knotted at 27 late in the game.  Stanford's coach calls "Spider 3, Y Banana" and instead of going through his proper progression, the great All-American quarterback decides to do his own thing and throws backside to a curl route, which is jumped by the defensive back and returned for USC's go-ahead touchdown.
Luck and his teammates were able to go back down the field and save the game, but Gruden had made his point extremely well.  Do what you are supposed to do!  Go through your progression and take the easy, open throw!  Great players will make great plays, but those come after the play breaks down, not before.
Coaches spend a lot of time designing plays and need the players to execute the game plan!
Next up for Gruden, RG3!
Posted by Jeff Carlson at 9:00 AM