Can Kellen Moore Move To Next Level? 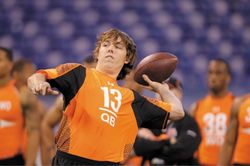 Every measurable screams average (at best).  But, Kellen Moore, the record-breaking QB from Boise State only lost a couple of games in his career at Boise, who only recently became a national power and that had much to do with the left-handed quarterback.
He reminds me a Ty Detmer type players.  Detmer is also of small stature and relatively weak arm strength, but won the Heisman Trophy playing for BYU, and had a decent NFL career.
Kellen Moore's lack of arm strength has something to do with his Tebow-like mechanics (see photo from combine), but unlike Tebow, he is extremely accurate and has used his zen-like instincts to get rid of the ball quickly and efficiently to the right guy and allowed his Bronco teammates to make the big plays.
Because of his arm strength, he will probably go undrafted, but will most likely win a 3rd string job with somebody come September.
Posted by Jeff Carlson at 3:24 PM