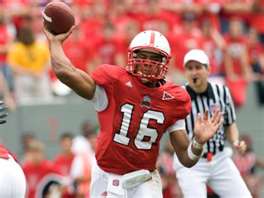 Another smallish quarterback stepped into the stature-challenged friendly confines of the FFCA.  Jon Gruden has never interviewed a QB he didn't love deeply and Wisconsin's Russell Wilson is now in this growing list.
Gruden hammered the "too short" complaint against this very effective, successful and impressive young man to make the point of how good he has been at both North Carolina State and Wisconsin, even playing behind the biggest line in college football with the Badgers.
I haven't paid much attention to him because I saw him as a "running quarterback" as he looked like a Nebraska style QB many times, but Gruden's QB Camp gave me more exposure to him and would certainly like to have him as a backup on my team.  I don't know if he will ever get a real chance to take a starter's spot in the NFL, but his intelligence and competitive spirit will keep him around for a while.
Posted by Jeff Carlson at 9:13 PM