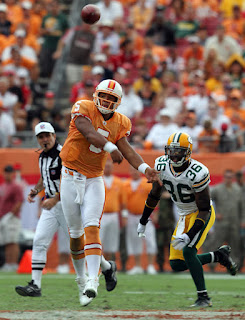 A few weeks ago, Tim Tebow made news about continuing to add bulk to his already bulky frame.  Anyone else in the football world makes less news and much less has been made of Tampa Bay Buccaneers quarterback Josh Freeman slimming down for the upcoming year.
By adding weight and strength, Tebow is basically saying that he isn't serious about playing quarterback full-time in the NFL or at least not for the New York Jets this year.  Tebow would do well to emulate Rocky Balboa in Rocky III, when he took to the pool and other means by which to create quickness.  He is plenty big, even if he lost 15 pounds of his 250 lbs. body, to withstand an NFL season as a "slash" type option QB.  Tebow has a slow arm swing to begin with and needs to understand the difference of snapping his elbow to create power and speed and not swinging his entire arm over and around to throw the football.
In the meantime, on the west coast of Florida, huge QB Josh Freeman has taken another tack to improve his chances of playing better in the fall.  He has dropped significant weight and gotten a haircut and I applaud both.  First, he was pudgy and does not need to be above 260 lbs.  Secondly, he needs to mature and his flopsy-mopsy hairdo was doing nothing for creating the persona of being serious on the field.  Life is about image as Andre Agassi drilled into our heads for so many years from the tennis courts and so it is on the football field as well.  How people perceive your leadership and competitiveness is as important and many times more important than reality.  Losing weight and cropping the hair to give the impression of a more business-like approach will do him and his team well this year.
Posted by Jeff Carlson at 5:44 PM