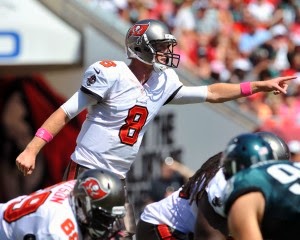 Mike Glennon was drafted in the third round by the Tampa Bay Buccaneers earlier this year and there was quite a bit of wondering why Head Coach Greg Schiano would do such a thing with a young "franchise" quarterback in Josh Freeman as the starting QB and plenty of needs on the rest of the team.  Schiano made a few curious comments and a few clarifications the rest of the sping, always assuring that Freeman was the team's starting quarterback.
After a series of miscues by Freeman came to public knowledge and maybe a few that didn't, a very poor start for both the team and the QB, the Bucs sent Freeman to the Vikings and elevated their tall and skinny rookie QB Mike Glennon to the starter's role.
Glennon wasn't good enough to lift the Bucs to the first win of the season or for the next few weeks, but he continued to show promise and a better consistency than the fifth year Freeman had done.  Finally, after an 0-8 start and most fans starting to just hope for the first pick in next year's draft, the Bucs entire team turned a corner, led by the play of that same tall, skinny QB from North Carolina State.
With almost perfect QB ratings the last few weeks and absolutely no interceptions, the Bucs have now won 3 games in a row and behind those great QB ratings and defensive turnovers as well as special teams turnovers, the Bucs look like they can play with anybody.
3-8 isn't very good, but to the depths of where the Bucs had fallen, it looks really good!  There are some very tough games still on the schedule and I doubt many believe they could run the table, but Coach Schiano looks like he has saved his job for this year.  And if the Bucs don't have one of the top picks in next year's draft, Glennon's great play may have saved his own job as well!