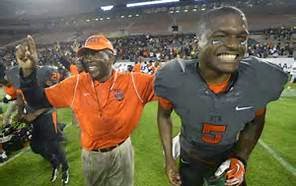 Just wrapped up another great season of high school football on Bright House Sports Network in the Tampa, Florida area a couple weeks back and the Florida State High School Championships last weekend, so this is my first Friday since mid August with nothing to do.
It was a great pleasure to call five of the eight state championship games and watch the #1 and #3 teams in the nation, Booker T. Washington and Miami Central, respectively.  Both repeated as state champions this year and deserve their national rankings.  Booker T. beat Central early in the year and deserve their top ranking as well!
What caught my eye over those two championship weekends, other than many amazing high school players at every position on the field, was Booker T. Washington's QB Treon Harris.  If you like the way Johnny Manziel plays football, you will especially enjoy Harris.  He is coached by both his father (head) and brother (offensive coordinator) and is a passer with incredible escapability powers.  He is only about 6'0, maybe, but Jimbo Fisher and Florida State University are glad he is coming their way soon.  I'm sure Fisher is in no hurry to get Jameis Winston on to the NFL, but be sure that the Seminoles will be in good hands when it's Harris' turn to take over the helm for FSU.
It is great to take a breath here at the holidays and be thankful for so many things, because, as we referenced many times over the last two weekends, these high school football teams will only take a short break and be right back into their preparation to get back to Orlando next December.