McNabb Gets Eagles to Another Championship Game 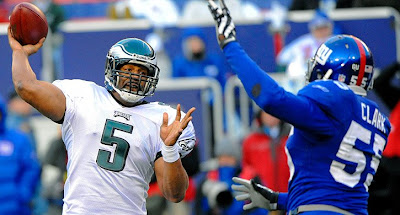 Can someone give Donovan McNabb some credit? He was written off as trade bait--we were talking about him coming to Tampa very recently--and now after knocking off the Giants, has his Philadelphia Eagles in another NFC title game. That's his fifth if anyone is counting. No one seems to put him in the elite QB category, but not many have led their teams to as much success. I think he just seems to have too much fun while playing and of course that lackadaisical look during the Super Bowl didn't help, but nonetheless he will have a pretty strong record of success when he wraps up his career and he's only 32 right now.
I would really like to wish McNabb luck this weekend, but I'm hoping Kurt Warner can lift his Cardinals to their first appearance in a Super Bowl in their team's history.
Posted by Jeff Carlson at 10:34 PM