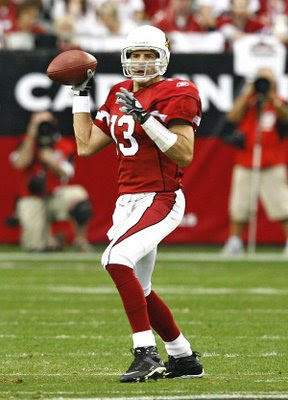 Kurt Warner won it in 1999 and Ben Roethlisberger just two Super Bowls removed from his first NFL championship. Sunday night one of those two will add another and put himself in rare company, most of which are in the Hall of Fame.
The Arizona Cardinals will depend on Kurt Warner to drive the train for his team to be successful, while the Pittsburgh Steelers stand a good chance of winning the game if Ben Roethlisberger just stays out of trouble. That is not a knock on Bib Ben. He is very good, but it is just the make-up of his team to play it a little closer to the vest and let the defense take care of the other team's offense.
The Cardinals defense has shown throughout the playoffs that they are no slouch unit, but it is the wide-open offense, triggered by Warner's quick decisions and release that make most of the headlines.
While I love offense and am very comfortable in the Cardinals style offense, I do understand the history of this game favors the better defense and in this case I believe it will be Ben Roethlisberger hoisting the Lombardi Trophy once again.
Posted by Jeff Carlson at 8:20 PM