Buccaneers Going to Rookie at QB 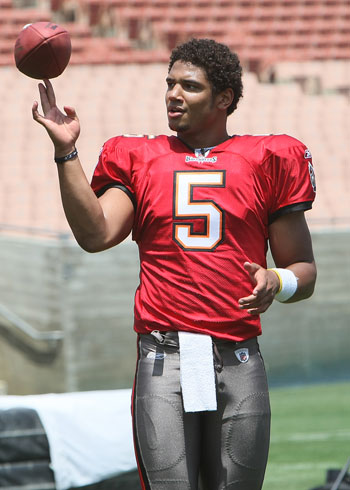 The Bucs moved up in the draft to take Kansas State junior Josh Freeman. Now the Bucs have moved up his development timetable as well, making him the starting QB for their next game November 8th against the Green Bay Packers. The winless Buccaneers haven't had any offensive firepower this season after firing their offensive coordinator with 10 days to go before the season opener. The started the season with the slow-footed and slow-releasing Byron Leftwich at the helm, but after 3 poor losses, switched to second year pro Josh Johnson. Johnson showed flashes of athleticism, but lack of judgement and accuracy that is so common in young QB's. Now they turn to the biggest QB in the league, who owns good mechanics, but lacks a sense of urgency in his drops and time to finding a receiver. The lack of ingenuity in Tampa's offensive play-calling, will surely doom the beginning of this youngster as well.
At the same time that the Buccaneers make a switch to a rookie, the Carolina Panthers decide to stick with the aging Jake Delhomme, who has struggled with accuracy this year worse than any rookie I've ever seen. His struggles date back to last season's disappointing finish and have continued to plague what was thought of as a very talented and strong football team. Problem for Carolina is they really don't have a better option to bring off the bench. The Bucs look to the future while the Panthers don't seem to have one, even though they have won a game this year and the Bucs have yet to do so.
Posted by Jeff Carlson at 3:28 PM

ingenuity, you're being kind. they suck. They better devise an offense for Freeman, not hope he fits theirs