Classy QB's in Win and Loss 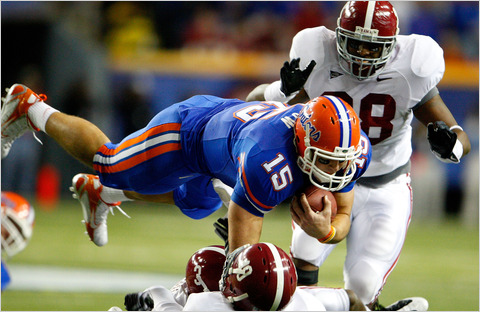 Saturday was an emotional day for many in college football, probably not more than for Tim Tebow and the Florida Gators and the Nebraska Cornhuskers last second loss to Texas after thinking they had won the game moments earlier.
What I took from those two games was the classy reactions of both Tebow in their loss and Colt McCoy in their win. The two record setting QB's had different outcomes to their evenings and seasons, but they treated the answers to the media's questions with dignity and respect.
Tebow said what everybody else saw during the game. Alabama was the better team and congratulations to them. McCoy, on the other hand, had to explain his decision-making process as the clock was winding down to :00 and throwing it out of bounds as the clock was expiring on his national championship hopes and maybe even the Heisman Trophy as well. Although, Mark Ingram may have wrapped up that trophy with his performance in the SEC Championship game before the Big XII Championship ever kicked off.
McCoy explained that he had everything in control (I couldn't believe they rolled out with that little time on the clock), but if there is no instant replay, his team's title chances go up in confetti for the Nebraska Cornhuskers. Regardless, he did get the ball out of bounds with time on the clock and the kick was good.
Both of these senior college players showed great leadership, one in victory and the other in defeat.
Posted by Jeff Carlson at 10:02 AM