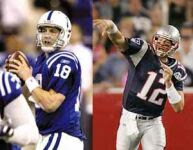 Peyton Manning has led the Indianapolis Colts to so many regular season wins in the 2000's that their current run of 14-0 is almost boring. He is the single most important player to his team in the NFL. I and I'm sure every Colts fan shudders to think what their team would be if he went down with an injury and am surprised that they are risking so much with a rookie backup.
For his phenomenal effort this year, willing his team to a number of close shootout wins, Peyton Manning is ABQB's 2009 QB of the year.
As I watch, read and listen to sportscasters around the nation, there seems to be a consensus the Manning is also the QB of the decade and maybe the history of the NFL. I beg to differ. Based on the most important wins of them all, Super Bowl victories, Tom Brady is ABQB of the decade. Brady won 3 Super Bowls in the decade, reached another with an 18-0 team which probably should have won another if it weren't for Eli Manning and David Tyree's heroics at the end. And, in Peyton Manning's only appearance in the title game, he and his Colts had to make an amazing comeback in the AFC Championship to reach the Super Bowl. Brady quite possibly could have five rings instead of three. But for these unbelievable achievments Tom Brady is the QB of the decade.
Posted by Jeff Carlson at 3:40 PM