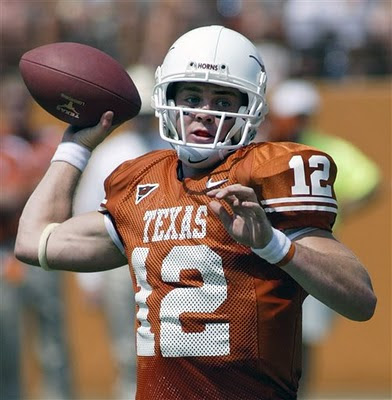 It was supposed to be Colt McCoy's swan song, like his friend Tim Tebow, two of college's most heralded quarterbacks of all time. Tebow's Gators didn't make it into the championship game like they had planned at the season's outset, but in his career finale, he left the Sugar Bowl with the best personal stats of his career and a huge blowout win. The game had even more build-up and emotion because of Urban Meyer's recent announcements.
Colt McCoy entered the BCS Title Game as the winningest QB in college football history, starting since his freshman year. But only moments into the game, he took a hit on the back of his right shoulder and his world changed, as well as the fate of the Texas Longhorns.
Enter true freshman QB Garrett Gilbert, one of the biggest recruits last season. With Colt McCoy in Heisman Trophy contention, Gilbert got spot work this year after McCoy put his team well ahead in some of their games, but this was no UTEP. This was the top ranked Alabama Crimson Tide, who had recently made Tim Tebow look very mortal. No one was ready for this, not the QB and not the coaches who dramatically changed the game plan for their young signal caller.
Things couldn't have gone worse for Gilbert in the first half, with even a shovel pass (low risk right?) getting intercepted and returned for a touchdown. I felt for the kid and his family (father Gale, a former NFL QB himself). I have two sons that could be in that situation down the road and it was hard to watch, but Gilbert did gather himself after the break and put up two TD passes. He and the Texas defense also got them back to within 3 points before Alabama woke back up and slammed the door shut in the final moments.
This game was another example of just how important the QB position is to the game of football, even more so now with all of the spread formation teams.
Colt McCoy has been fun to watch run that spread offense of Texas for four years. I hope his shoulder heals and he gets all he hopes and dreams for in the NFL. He seems to be a great person, like his buddy Tim Tebow.
Posted by Jeff Carlson at 8:59 AM