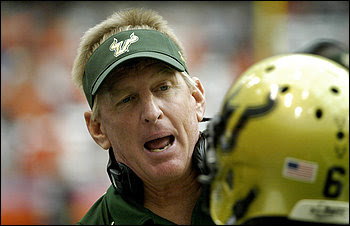 Two head football coaches at top colleges have been fired with cause recently over their treatment of players. I would venture to guess that almost every college football over the last 30 years would have a story or two of player mistreatment somewhere in their memories.
In the most recent cases, Texas Tech fired Mike Leach for sending a player to a dark room for an extended period after the player showed up at practice unable to participate because of a "mild concussion". Last Friday the University of South Florida fired Jim Leavitt, the only football coach in its history, for grabbing a player by the throat and slapping him in the face twice during halftime of a game and because his report of the incident did not match up with any of the witnessed accounts of the incident. Both coaches are indignant and Leach has sued the school. Leavitt's firing is so new he probably hasn't had a chance to make that decision, but it seems most coaches do fight back in court.
I understand how frustrated coaches can get during the course of a game. You have tried to prepare your players for every situation and even though you (the coach) were never a perfect player in your own time, you wish your players were. Many times you have corrected a player's mistake on the practice field or gone over the exact situation prior to the game and then you watch the same thing happen on the field only to see a player make the corrected mistake. This can boil over and has too many times. The Woody Hayes incident still lingers in our memories (if you are old enough) and that is a good thing, because there aren't that many public incidents that we can all refer, but it is a different world of political correctness that we live in today. Sometimes it may seem a bit too PC, but as far as player treatment, we need to remember it is a game.
My wife has been "beating me up" over my treatment of my son's middle school basketball team recently. She says I yell too much at the kids, especially my own 12 year old son, and have even touched them in a too-aggressive manner, pulling on their uniforms or such. I disagree and may even seem like Leach or Leavitt in their lack of understanding of the situation. When a kid is told to go to a specific spot on the basketball floor and just looks at you and doesn't respond, it kind of frustrates you. I try to control my emotions at these times (which, in middle school basketball, happen about every second of the game) and substitute a player that either doesn't understand what I am asking of him or is just doing his own program, but it is not easy and isn't on a national stage like NCAA football.
Every situation will have its own unique details, but coaches now know what the "rules" are for player treatment in the 21st century.
Posted by Jeff Carlson at 10:46 AM

Interesting post Jeff. Totally understand the frustration level issue, and obviously grabbing a jersey isn't quite the same as grabbing someone by the throat.

It appears Leavitt is going to fight as well, though he may want to consider how far he takes that fight. I have a feeling some of those vague recollections some of the players and staff had may get a little clearer under oath. I have a feeling it's more about reaching a financial settlement, but we'll see.