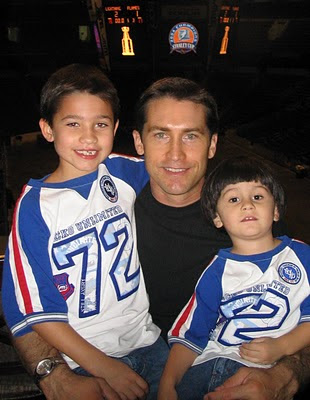 Broadcaster Gary Danielson weighed in on the subject of these wayward coaches and taking their jobs a little too far in the "fatherly" department, saying something to the effect that it's his (Danielson's) job to be the father, not the coaches. I believe the reference is from The Dan Patrick show. I saw it in the newspaper today. Mike Leach tried to act like he was looking out for Adam James' best interest and USF's Jim Leavitt was "concerned" about his player.
I agree with Charles Barkley, who famously said years ago, that he is not a role model, parents should be their kid's role models. True, true, true. I agree with Gary Danielson's point as well that it is actually the father's role to be the supreme person concerned about a players well-being.
Here is where both former players miss the bigger point. I broadcast high school football games in the greater Tampa Bay area and when senior night rolled around at a particular game this year, about 20 or so seniors were introduced to the crowd with their parents or parent or grandparent or coach. Of those 20 senior football players, maybe four or five had a father to walk with. Approximately 75% of the players had no father looking out for their best interest and professional players are role models, like it or not Mr. Barkley. They have no father concerned for their well-being Mr. Danielson.
And the college football coach that came into their living room and told them that they would take care of them and be their family now and always, might need that guy's emotional support during times of struggle.
This is not to say that what Mark Mangini, Mike Leach and Jim Leavitt did or may have done was appropriate in any sense, but the bigger point here is not every kid has the same support system that Gary Danielson's children have and that is why these situations are so critical and important on a grander scale.
Posted by Jeff Carlson at 10:30 PM