Matt Barkley will be talked about all season long in much the same way Andrew Luck was last year, as the consensus #1 pick in next year’s NFL Draft. Of the list of other QB contenders that might wrest the top spot from him, it doesn’t seem likely that he will not be the first passer gone and likely the first of all players.


I was glad to see Barkely stay for his senior season, as I am to see others do the same, like Tebow did after winning the national championship in his junior year. Tebow needed to get better, Barkely probably had a couple of other reasons and getting better wasn’t at the top of the list. With USC’s disciplinary problems, Barkely has quarterbacked the Trojans through a tough time and kept them at the elite level they were when they were doing the things that got them into trouble in the first place and that was no easy task and seeing it through to his senior year had more personal value to him. Secondly, with Luck and Robert Griffin III in this year’s draft, waiting until 2013 would give him a much better chance of getting the #1 slot.

Most players benefit from staying an extra year in the college game for both personal and physical maturation, but if the money is right, it is time to go no matter what sport you play, because you can always go back and get the degree, but you can’t always guarantee what might happen from one year to the next. Stay healthy this year Mr. Barkely and get some insurance.

Posted by Jeff Carlson at 7:49 AM No comments:

Matt Flynn Can Get It Done 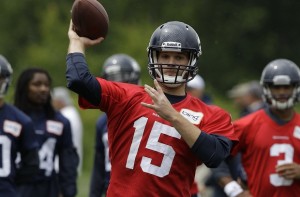 Matt Flynn is listed at 6'2, 225 lbs.  The new Seattle Seahawks quarterback fighting for the starting job against Tavaris Jackson and even 3rd round pick Russell Wilson, who is just 5'10.  Flynn doesn't seem like he is as big as listed while playing and has flown under the radar for his brief career until his breakout game last season against the Detroit Lions.
After that game Flynn became one of the hottest free agents this off-season.  Watching that game recently on NFL Network, it was a spectacular shoot-out between Flynn and Matthew Stafford, I took note of Flynn's mechanics and footwork.  He has the goods to become a solid, if not very good, starter in the NFL.
Many quarterbacks are sloppy in the final stages of setting up to throw and take extra steps and change their balance to stop the dropback and transition to throw.  Matt Flynn showed a number of times that he keeps his balance very well on his last step, with minimal wasted movement and gets rid of the ball.  There was a play late in the game off play-action where he would have been hit in the pocket if he had taken any extra steps, but he was clean, got rid of the ball and even though it was a bit behind the receiver, because it came out efficiently, the receiver caught it before the defender could get there and ended with another TD for Flynn.
Matt Flynn won't be flashy in Seattle (is anything flashy in Seattle?) and he will have to fight off the athletic Jackson and solid Wilson for the job, but he will be a guy that can run an offense efficiently and give the Seahawks a chance to win.
Posted by Jeff Carlson at 9:35 AM No comments: