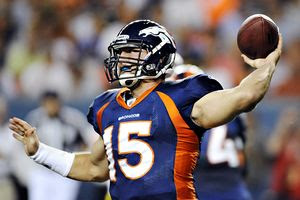 Following one of the worst looking games by an NFL quarterback and taking the massive flak that only Tim Tebow can generate, he weathered it and came back the following week by winning a division game on the road. Tebow ran and threw for over 100 yards and he got help from the rest of his team, including a special teams touchdown.
If the Denver Broncos are willing to change their offense to fit his skills, they will probably be very competitive in most of their games, but by the beating he took against the Raiders, the Broncos will have to be ready to go back to their standard offense with either Kyle Orton or Brady Quinn, because neither of them are going to run the offense the way Tebow does. This is the dilemma for any NFL team that takes a college QB that runs the spread option, but has tons of athletic ability. The Carolina Panthers are bound to find out what it is like to play without Cam Newton sometime as well, but he hasn't taken the pounding in starting all of their games this year as it seems Tebow has in his 2 starts.
Posted by Jeff Carlson at 8:39 PM No comments: 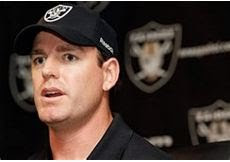 The Tampa Bay Buccaneers welcomed back Free Safety Tanard Jackson after more than a year away from the team. Jackson failed a drug test and was suspended, missing most of last season, training camp and the first 5 games of 2011. After a couple of days of practice, he started and helped his team to a big division win with an interception.
Now the Oakland Raiders are playing the "will he or won't he" game with their new quarterback Carson Palmer. With the trade barely finalized, Raider Head Coach was coy about his new QB's ability to start on Sunday. These two examples would make Allen Iverson proud. Who needs practice anyway? Not the NFL. After missing the entire off-season with the lockout, everything is pretty much business as usual on the field.
It really is a slap in the face to the players for anyone to walk in at this point and start after a couple of practices. So much for the talk of needing the off-season and training camp reps for the rapport to be built between the QB and receivers.
Posted by Jeff Carlson at 10:16 PM No comments: 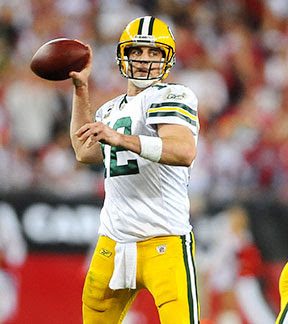 Aaron Rogers became the best QB in the NFL last year. Tom Brady and Peyton Manning have ruled the top of the NFL list as 1 and 1a. for a decade, but just as the New England Patriots and the Indianapolis Colts have depended on those two QB's as much or more than any teams have in NFL history, Rogers is now that guy, carrying his team on his shoulders. Yes, he has a pretty good defense, but his ream runs because of his efficiency on offense. The Green Bay Packers have been challenged this year, as they have run their perfect record to 6-0, but they are a dominant team and are tough to stop with Rogers' ability to move in and around the pocket and then get rid of the ball with a great release and plenty of power. Who knows when or if Peyton Manning makes it back to the game and Tom Brady still has plenty left in the tank, but Aaron Rogers is firmly on top of the league's top QB's.
Posted by Jeff Carlson at 9:53 PM No comments: