NFL Draft Goes As It Should 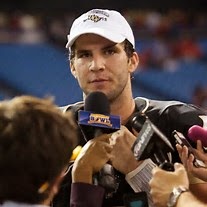 This year's NFL Draft was the most exciting in years and full of intrigue at the top of the first round with Jadaveon Clowney, thought to be the best overall talent in years and the multiple teams at the top with quarterback needs and the enigma talent of Johnny Manziel.  The Houston Texans decided to pair Clowney with superstar defensive tackle J.J. Watt in what could be the most devastating duo since Warren Sapp and Simeon Rice disrupted the Oakland Raiders for a Super Bowl title in 2003.  This was the right choice, because none of the QB's on the board could have improved the Texans anywhere close to what Clowney has the potential to do.
The Jacksonville Jaguars had the third pick and the pick of the QB crop.  They took the least risky route by going with the big and mobile Blake Bortles from the University of Central Florida.  Many draft gurus will say that his lack of total college starts is a historical problem for those signal callers that have come before him (Mark Sanchez).  Bortles size, athleticism and work ethic seem to check out well and was the best bet for long term success.

Johnny Manziel was this year's Aaron Rogers.  Rogers languished in the green room after watching Alex Smith (taken by 49ers, now with Kansas City Chiefs) go #1, when he was considered for that top spot by most "experts."  The Cleveland Browns moved all around the in the first round before moving up to get Manziel at #22.  This is a good value pick and a good move by a franchise that desperately needs something to cheer for.  The Browns management has made it clear to everyone that they want him treated as a rookie that needs to come in and work for his spot--a back up spot at that.  With Brian Hoyer considered a journeyman at best, I'm not sure how long the Browns will be able to weather the call for their exciting back up QB to come in and turn on the magic!
Teddy Bridgewater was this year's "most NFL ready" quarterback, deemed by talking heads following the college season and into the longest NFL Draft season ever.  After failing to impress in his pro day, his stock dropped significantly, but the Minnesota Vikings still made him a first round pick, taking him at #32, the last of the day and round.  I have my own doubts about Bridgewater and was not part of the crowd that thought he was the best prepared for success.  I don't take away any of his accomplishments at Louisville and his production, but he isn't very big, not super elusive, and most of all I don't like how low his release is off his shoulder.  This will be a problem in the NFL, unless it is diagnosed and improved.
Aaron Murray and AJ McCarron went in back to back picks in the 5th round to the Kansas City Chiefs and Cincinnati Bengals, respectively.  Both of these guys found good landing spots for themselves, as they will not have the same pressure as the others and can both play the game and be successful.
One of the surprise moves was the New England Patriots taking Eastern Illinois prospect Jimmy Ga
rappolo with the 60th pick, before they had traded their long-time back up Ryan Mallett.  Rumors say they were close to dealing him to the Houston Texans, but that remains just that, rumor.
Overall, this was a very good class of QB's, some more ready than others to actually step in and be successful in the NFL, but where all the chips fell, it seemed that the teams that took the leap at QB, filled their needs very well!
Posted by Jeff Carlson at 1:33 PM No comments: 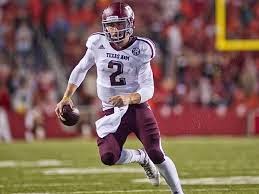 I really like to watch Johnny Football play football.  Johnny Manziel will most likely be a top 5 pick in next week's NFL draft and will sell many tickets to his new team's games and to many away games, much like Michael Jordan did in all the visiting cities his Chicago Bulls played in.
From a technical standpoint, he throws the ball really well.  He has the quickest release of all the QB's in the draft and has plenty of arm strength to be successful in the NFL.  Manziel's biggest problem is that much of what made him Johnny Football at Texas A&M is exactly what will make his NFL career an abbreviated one.  Mike Holmgren recently said he is a lot like Brett Favre and I agree very much.  Manziel's "gunslinging" style makes for great watching, but for big mistakes as well.  I believe Manziel is a better, more pure thrower than Favre and will make less mistakes overall.  It took Holmgren a long time to take some of Favre's wild plays out of his game and to a Super Bowl victory.  Favre continued to make great plays and some really bad ones as well as his career continued on what seemed like forever.  Unfortunately for Manziel, I think it is his overall style of play and lack of physical size (girth) that will give him a much shorter career than Favre, who played through much pain, but avoided the big injury that hit RGIII, the last phenom to hit the NFL.
I was wrong about Allen Iverson when he went into the NBA.  He had a much longer and better career than I thought he would.  But, I am not a basketball analyst and didn't play in the NBA.
Johnny Manziel will get drafted at or near the top of next week's draft.  He will be exciting as heck to watch. And God willing he will avoid the big injury, but like Michael Vick, who depended on his legs so much, Manziel will struggle to stay on the field full time.  So, whoever does draft him better really like their backup QB, because it's a good bet that he will be your starter more often than you would like.
Posted by Jeff Carlson at 8:43 AM No comments: