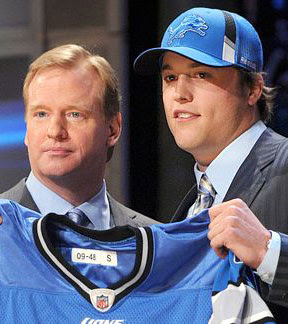 The Lions, Jets and Buccaneers all need a "face" for their franchises and as Saturday afternoon turned into evening, all three have acquired their guy! Matthew Stafford seemed to drop on many draft guru's lists as draft day approached, but the worst team in the NFL stuck with the long-time favorite top pick. The Jets made an aggressive move to get someone they think can fill their most important position after the one year Brett Favre experiment. Mark Sanchez seems to be the most ready QB to step in and play well in September (no rookie is ever really ready, but if the team around him is solid, they can survive the rookie rocky road that most go down).
The Buccaneers haven't drafted a quarterback number one since Trent Dilfer in 1994 and this wasn't a popular pick by fans or media in the Tampa area. But, Raheem Morris said this guy is the best of all of them (at least he will be before it is all over) and they had to go get their guy. Doug Williams (former Buc great and current Buc executive) said that Josh Freeman will not be expected to play in his rookie season, but I think he will see significant time.
There wasn't much else to talk about after that, but Pat White did go earlier than expected (2nd round, #44 overall) to the Miami Dolphins and the Dolphins promptly released John Beck, who was their second round pick only two years ago. Top seniors Chase Daniel and Graham Harrell both went undrafted.
Posted by Jeff Carlson at 5:33 PM No comments: 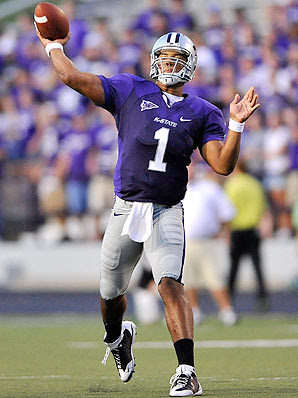 I don't endorse magazines, but I'll give kudos to The Sporting News for their NFL Draft Preview issue this year. There is a very good article on QB's and advice from former 1st rounders that have had their share of "hard knocks" along the way.
Most of the quarterback's advice seemed to focus on more study and time commitment to learning more about the team's offense or how to read defenses.
I was a 4th round pick, but can agree with those guys and say if I had it to do over, I would have spent many more hours in the film room learning the subtleties (that means the little things) of the game. Arm strength is a great thing to have, but knowing where to throw the ball with confidence (even when things are breaking down around you) is the biggest key to success.
Posted by Jeff Carlson at 4:50 PM No comments:

Lions Should Shore Up Defense With #1 Pick

I love the quarterback and so does America. Everybody knows the face of the franchise, the one with the ball in his hands on each offensive play, but the Detroit Lions have had so many high picks in recent years and so many busts with those picks, the new management team really should go with a defensive pick to open the 2009 draft.
Another reason they should go with defense is because I really don't believe Matthew Stafford should be a #1 overall pick and if a team uses that expensive pick on a guy that isn't worthy of that valued spot, then you haven't really made your team as strong as it could have been. And the Lions can't afford to do that at this point.
Stafford will probably be a very nice QB for whoever he ends up with, but it shouldn't be the Lions.
Posted by Jeff Carlson at 9:24 PM No comments: