Brett Favre Not Playing This Year? 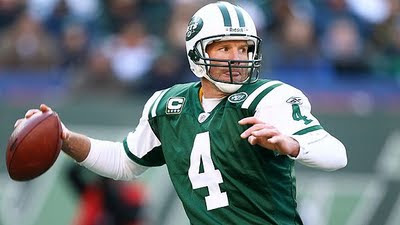 I've been writing off Brett Favre as being done playing for half a decade now and it seemed as if he had finally written himself off earlier today, but just as I was preparing a final goodbye, I hear he may be interested in playing later in the year if a contending team comes calling. So, I will save his fond farewell for another time.
Posted by Jeff Carlson at 9:52 PM No comments:

T.O. Gets It Right For a change 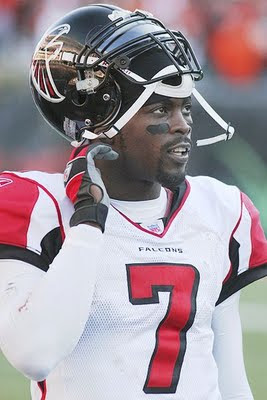 Although I don't think I agree with Terrell Owens very often on very much, I do think he is right about the additional punishment NFL Commissioner Roger Goodell handed down to Michael Vick. The opinions vary on this one and even Tony Dungy weighed in today, also agreeing with T.O.. Owens is probably not the best spokeman for anybody and used a bad analogy to make his point, but with half a preseason and a suspension to start the year, it almost makes it impossible for Vick to get back into the league this year.
Since Vick has superhuman athletic ability, he may still make it back, but his suitors would have been few to begin with, but after two years out and no offseason program to learn an offense and get back in shape, it feels like Goodell reached even deeper to hurt the former all-star QB. Maybe Vick lying to the commissioner's face will have that effect, but I think two seasons out of the game was punishment enough.
Posted by Jeff Carlson at 6:20 PM No comments: 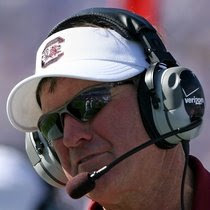 Steve Spurrier admitted to putting Old Miss' junior QB on the preseason SEC team and leaving off Tim Tebow, the former Heisman Trophy winner and two-time national champion. The "Old Ball Coach" has been an odd man his entire career and just added fuel to his long list of jabs that have made his career interesting to watch. Snead may be the best passer in the SEC this year, but Tim Tebow will again be the best player. Spurrier asked for his vote to be changed to Tebow.
Posted by Jeff Carlson at 10:33 PM No comments: 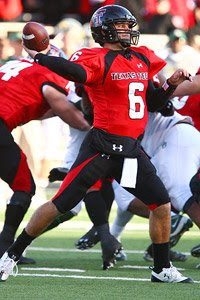 Graham Harrell lit up defenses far and wide while at Texas Tech and made it look easy in the process. But college success doesn't always translate through the scouts eyes onto the NFL field.
I would put Harrell in the same boat as Colt Brennan, formerly of the University of Hawaii and now with the Washington Redskins, although they are different style quarterbacks. Both made the game look simple until they played teams with good defenses. Brennan's bad mechanics caught up with him in Hawaii's Sugar Bowl game against Georgia (his balls were far short from throwing off his back leg) and Harrell had similar problems with Oklahoma's fast defense.
I think Harrell is in the right place with the Saskatchewan Roughriders of the CFL-bigger field and 12 players, giving him room to dink and dunk like he did in Lubbock. The CFL has already started their season, so its a good time for him to drink in all he can about the new rules (multiple men in motion, 3 downs, etc.) from the sideline and get ready for next year.
Posted by Jeff Carlson at 7:31 PM No comments:

Brett Favre To Decide by Opening of Training Camp 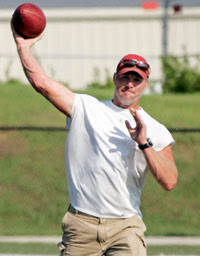 Former NFL great Brett Favre will decide if he wants to become present NFL quarterback of the Minnesota Vikings by the time they open their training camp. How nice. Either the Vikings believe that they are an experienced QB away from the Super Bowl or they are so bad at quarterback right now that a one year window with Favre is worth playing around with, while not developing their current crop very much as they carry the clipboard this season.
Here's one thing in Favre's favor that neither he nor the Vikings seem to be realizing and you can see some of it in the photo with this article. Good mechanics. Brett doesn't want to come back unless he has that great arm strength that he has built a Hall of Fame career with, but little does he know that he may become the John Elway of this year. Elway threw the ball too hard for many years, but as he controlled himself a bit better after the age of 35, so too could Brett Favre if he isn't quite as confident in his arm strength. If he plays a little more controlled and within himself, Adrian Peterson and Favre could team up to make a run like Elway and Terrell Davis did to finish the 1990's of in grand fashion.
Brett doesn't need to have the strongest arm in the league, he needs to make the best decisions in the league because he has the most experience and that is what experience is supposed to do for you, give you better decision making skills, his arm will always be strong enough.
Posted by Jeff Carlson at 9:42 PM No comments:

Steve McNair was a great quarterback

"Air" McNair. Who was this kid out of Alcorn State that nobody had seen play, but was dubbed with Jordan's nickname? Steve "Air" McNair came in third in the Heisman Trophy balloting his senior year, a tremendous feat in itself coming from Alcorn State and then topped that by becoming the third pick of the NFL draft.
He lived up to the billing as he became an all-star and MVP while leading his once downtrodden team to within a yard of a Super Bowl title. Randall Cunningham came before McNair as a very elusive QB in and out of the pocket, but didn't depend solely on his legs to win games. McNair was strongly built and tough in the pocket, much more like a Phil Simms, but with scrambling ability just short of Michael Vick. To me, he was a great blend of what is needed at QB today and tomorrow.
Steve McNair, a fantastic football player, was already missed on the field, retiring before last season and will be missed after his death as well.
Posted by Jeff Carlson at 6:36 PM No comments:

Eli Near Top of Mechanics Tree 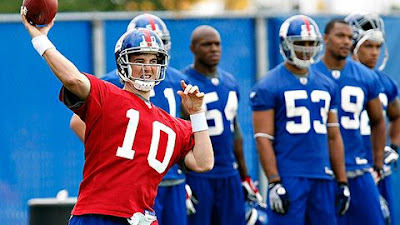 The bottom line in team sports is wins. Ugly wins or pretty wins don't matter, just win baby! There have been successful quarterbacks with awful mechanics that just got the job done, but solid mechanics give the QB a better chance of producing repeatable results with his passes, thereby creating more potential positive results by the end of the game. That said, a beautifully thrown ball in the air, if thrown to the other team, doesn't mean much, so decision making will always be the most important attribute of a QB, but great mechanical fundamentals are a close second.
I put Tom Brady on the top of the list of best mechanics in the league. He is almost always on balance (football is a dynamic game, so it is impossible to always be on balance with pressure coming from different areas of the field each play). His release point is out front with the tip of the ball toward the target and his hips and shoulders are equal and flat (not tipped back or forward) on release.
Eli Manning is probably number two in the NFL right now. He is better than Peyton in the mechanics department. Peyton's weight is too far forward too early in his motion and causes him to rely on his arm a bit too much. No one is arguing Peyton's success, but Eli's balance is better throughout his delivery. They both have one Super Bowl under their belts, but we'll all have to wait and see how the careers end up to see which motion wins out!
Posted by Jeff Carlson at 12:15 PM No comments: