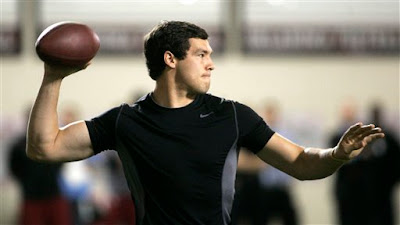 It wasn't as well attended as Tim Tebow's pro day a couple of weeks ago, but it drew rave reviews just the same. Tebow was praised for making some adjustments to his throwing motion to improve. Oklahoma's Sam Bradford was praised for getting his wing back to what it used to be. The big question mark for the potential top pick was how he has recovered from a throwing-shoulder surgery. Based on his workout for all of the NFL clubs, he has probably solidified his spot as the number one guy overall, following in Troy Aikman's footsteps of 1989, which long-time NFL evaluator Gil Brandt, compared Bradford's workout to.
I agree that Bradford looked very good and world's apart from Tebow's. I didn't see any dummies on the field for Bradford to jump over before throwing, but I did see a QB throwing very naturally and with good mechanics.
If Bradford is cleared as "good as new" on the shoulder, then the St. Louis Rams have just set up their future for the next decade and I think it is a good one.
Posted by Jeff Carlson at 11:37 PM No comments:

In the here today gone tomorrow world of professional sports, Derek Jeter, Kobe Bryant and Donovan McNabb seem like the longest tenured superstars of the "Big 3" sports. I'm not sure I've heard any rumors of Jeter's potential departure and Kobe has created his own drama around contract talks, but it is Donovan McNabb that seems to regularly be in the news about getting shipped out of Philadelphia.
It is easy to look at the quarterback position for a quick face-lift on a franchise, just ask the Minnesota Vikings about that. But the city of brotherly love is not an easy place to survive, let alone prosper and McNabb has given the Eagles an opportunity to compete for the Super Bowl many times and still has plenty left to give them a few more runs at the big prize.
ESPN was bantering about who would you rather have for next year Brett Favre or Donovan? Are you kidding? I give all the credit in the world to Favre for the run he helped the Vikings make, but choosing between a 33 year old that has taken your team to multiple NFC Championship games and a S.B. appearance versus a guy that doesn't participate with the team until the season starts and is 40? Come on now.
Is the NFL draft coverage that thin? Andy Reid and McNabb need to keep it together and make another run.
I know opinions vary on this subject, but I believe they need to incorporate their 3rd string QB, Michael Vick, into the regular offense with McNabb still in the game at QB and create a more dynamic style "Wildcat" than any other team can create. Give it a shot Andy, it will be worth it.
Posted by Jeff Carlson at 8:55 PM No comments:

Tebow's Team of QB Coaches Not Helping Much 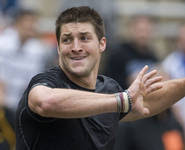 Mike Mayock of the NFL Network seemed impressed that Tim Tebow has moved his delivery from below his hip up a bit to slightly higher than his hip, but to the trained eye, he hasn’t changed much of anything at all. Even in his press conference following his NFL Pro Day at the Swamp yesterday, Tebow acknowledged it’s not much different, but feels comfortable. It should, because all of his balance issues are still present. His biggest problem from day one is how he swings his left hip around way past square to his target. You can see in all his videos how his left leg still swings way up in the air and his knee comes in front of his right leg, which it should not do.
I’m not sure if his current team of QB coaches cringe every time they see him throw or if they know any better, but his arm release is also completely wrong. When you watch his release and follow-through, he wraps his left arm around his waist at the finish, with his throwing hand’s thumb facing up. It should be snapping out to his target and turning over so that the thumb is facing the ground as it hits his right hip, not high around his waist.
I AM CAPITALIZING THIS FOR EMPHASIS. WHAT THE HECK ARE THE COACHES DOING MAKING HIM RUN OVER A SERIES OF BAGS (DUMMIES--THE COACHES) AND TURN LEFT AND THROW. PLEASE TELL ME THE LAST TIME A QUARTERBACK JUMPED OVER FOUR OR FIVE LINEMEN LAYING ON THE FIELD, MADE A 90 DEGREE TURN AND THREW A FOOTBALL. THIS IS THE DUMBEST THING COACHES MAKE QB'S DO AT CAMPS AND PRACTICE. ANOTHER DRILL SHOWN ON THE VIDEO AT HIS PRO DAY, WAS HIM SHUFFLING HIS FEET BACK AND FORTH ABOUT 20 TIMES AND THEN THROWING THE FOOTBALL. PLEASE SHOW ME AN EXAMPLE OF A QB DOING ANYTHING LIKE THAT IN A FOOTBALL GAME AND I WILL GIVE YOU A MILLION DOLLARS. HIS COACHES ARE SUPPOSED TO BE HIGHLIGHTING HIS ABILITIES, BUT I CAN'T UNDERSTAND MAKING HIM DO THESE STUPID NON-FOOTBALL RELATED DRILLS.
Unless he learns the weight transfer of staying centered between his knees longer and throwing the ball first, he will never become an adequate passer at the next level.
NFL Network analyst and former Redskins GM Charley Casserly is right on this issue. As he said, even though more evaluators seem to be moving to Tebow’s side of improving enough on the field to improve his status on draft day, Tebow is still too big a question mark to move into the highest rounds based on the other big piece of playing quarterback, decision making.
Posted by Jeff Carlson at 12:57 AM No comments: 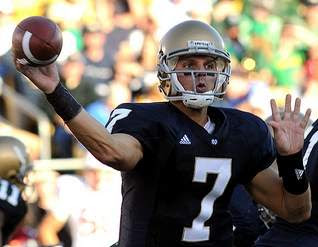 Mel Kiper Jr. and Todd McShay of ESPN make their livings by talking with NFL personnel about draft prospects and form their opinions off of those conversations. Maybe they have their own opinions as well. While I don't put much stock in either of them, they go "hot and heavy" in disagreement over Notre Dame's Jimmy Clausen.
Kiper loves him and McShay isn't so sure. I am on record that Clausen will not be great at the next level, which is what a top 10 pick is expected to be. Again, his mechanics are likened to Colt Brennan, out of Hawaii a few years ago and hasn't been heard of since. Not only that, but the Redskins are thought to be looking at Clausen as their potential franchise QB, where Brennan has been after setting so many passing records in the middle of the Pacific Ocean. Clausen's rating is obviously higher than Brennan's and will get a much greater opportunity to play, but will ultimately see his career go down a similar path to Joey Harrington's.
Chalk this round of draft banter up to McShay.
Posted by Jeff Carlson at 11:48 AM No comments:

Draftable QB's Unimpressive at Wonderlic Too

The top quarterbacks in the 2010 NFL Draft did not test their throwing arms at the combine, but they did put their brains to the test in the 12 minute timed "Wonderlic Test."
Every pro football prospect takes the Wonderlic, because the scouts give it to all senior players while making their rounds throughout the country.
The 50 question test has been ridiculed over the years, especially when it leaks that a player scored in the single digits, like Vince Young a few years back. And some writers or others that have taken it, like Bryan Kelly on ESPN.com's "Bleacher Report", say it is an easy test. It may not be the most difficult mental acuity test known to man, but when you are on the clock with pro scouts watching you, it adds a bit of stress to the process and in the samples that are usually shown to illustrate how simple it is, they leave out the extensive questions that are also a part of the 50 questions.
The fact is that great players have scored poorly on the test and poor players have scored very well, so it's not a "be all, end all" to what kind of football player you will be getting, but it could enlighten the evaluator to certain aspects of a player's needs that could be enhanced or may need help.
In 1989, I was told Duke prospect Anthony Dilweg had the highest QB score with a 36, I scored 33 and Heisman Trophy runner-up Rodney Peete got an 18. I can't remember exactly, but I think Troy Aikman scored in the mid 20's and I do not know what Princeton grad (Dallas Cowboys Offensive Coordinator) Jason Garrett put on the board.
This year's top prospects were all in the low to mid 20's, except for Sam Bradford who topped the group with 36.
Don't be fooled, Tim Tebow's 22 on the Wonderlic Test won't drop him down in the draft any further than his bad mechanics have already put him and a 36 wouldn't increase his draft status, because even though his Wonderlic is very pedestrian, Tebow's intangibles are almost unmatched, no matter if he knows if "present and resent" are synonyms, antonyms or neither.
Posted by Jeff Carlson at 5:42 PM No comments:

Combine: From Secret to Circus

When I got an invitation to the NFL combine, I only had a small idea of what to expect. My agent sent me a "super-secret" VHS copy of another QB's performance.
The NFL Combine was once one of the greatest secrets around. All the teams were there to see the results of the bench press, 40 times, jumps and shuttles, so there was no real need to keep these tangibles under lock and key.
Today, since the NFL has to try and keep fresh programming on its own TV network, it has been made into a spectacle. The NFL Draft and the NFL Combine are two hot pieces of media that keep the fans going between seasons. No other sports league has anything even in the stratosphere of off-season interest like the NFL.
I was on the other side of the field when Deion Sanders ran his infamous 40 yard dash. Roomed with Troy Aikman, who didn't throw routes with the other guys and it didn't hurt his draft status.
If you are in the top pick area, it is a good idea to wait for your pro day. Throwing routes to guys you've never said hello to is tough to be good throw after throw. My biggest regret was not throwing the deep ball far enough. You want the receivers to get their chance to make catches and you don't know how fast they are, but looking back, I should have launched my deep balls past everybody, instead of allowing the receivers to slow down a bit and get the reception.
The 300+ players that spent last week in Indianapolis have put themselves on tape now. Some small school players have now been on national television. Some bigger school guys may have been exposed in the strength and explosiveness tests. The NFL teams that just measured and interviewed these players will narrow that field and make personal trips to campuses across the country for more one-on-one events and for pro days as the fans get ready for late April and the wall-to-wall NFL Draft coverage coming our way.
Posted by Jeff Carlson at 4:45 PM No comments: