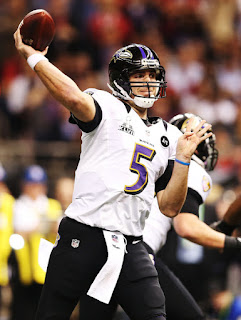 I'm not sure the San Fransisco 49ers could have played worse for much of Sunday's Super Bowl and I thought they would win, but the Baltimore Ravens were the best football team that day no doubt!
Joe Flacco seems to be one of the most unassuming players in the game, but he is one of the best throwers in the entire NFL!  His pinpoint accuracy sealed the victory and the start of his legacy.  Facing 3rd and about half a yard, most would think that a 6'5 QB might sneak it for the first down.  Flacco goes to the fade to Boldin.  Flacco threw a perfect pass and even with perfect defense, Boldin held onto the ball with two hands and brought it down to keep the drive and the clock moving.
I wish all of the commentators didn't spend as much time talking about Flacco's big pay day coming soon and focused more on his accomplishments.  He is already well paid and obviously will continue to be so, but he has accomplished more on the field than anyone in history, taking his team to the playoffs each of the last five years, the Super Bowl this year and now is the MVP and World Chanpion!
Posted by Jeff Carlson at 6:53 AM No comments:

Ravens vs 49ers in Super Bowl 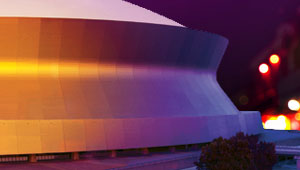 Before the kickoff of Super Bowl LXVII (47 for non-Romans) in New Orleans between the Baltimore Ravens and San Fransisco 49ers, I thought I would stick my two cents in on the eventual victor in what should be a very well matched game.
By all accounts the Ravens are being led through the playoffs on the emotion of their iconic and retiring middle linebacker Ray Lewis, who came back from a midseason triceps injury to make one final run at the Lombardi Trophy, like the one he and his team won in Tampa, Florida in 2000.  The Ravens defense has been the team's calling card for pretty much all of his 17 seasons and isn't what it once was, but they are still pretty good, but aging significantly.
The 49ers counter with great young talent that just missed this final game a year ago and responded strongly with their interesting head coach Jim Harbaugh, who took a very educated gamble on sticking with Colin Kaepernick's hot and talented hand when Alex Smith was ready to return from his concussion.  The Pistol offense is all the rage right now with the fast QB Kaepernick running it to perfection.
Pretty solid arguments can be made for either team and the "experts" seem to be split down the middle as far as I can see.  The oddsmakers give the 49ers the edge.  In this case, I side with the oddsmakers because of the speed of the 49ers, their solid defense and the fact that the Niners have the right people running this multi-dimensional attack.  I believe over the last two weeks the 49ers coaches have come up with a plan to stop the big pass plays that have helped propel the Ravens through the playoffs as well as stop Ray Rice on the ground with their front six or seven if needed.  I really like Joe Flacco as a QB and believe he has climbed that ladder to be considered one of the best in the league, but tonight will not be the beginning of his legacy of Super Bowl wins.
So with that said, I will go with the 49ers winning a great contest 31-27!  I wouldn't go to the bank with it, but I will stick with it.
Posted by Jeff Carlson at 3:53 PM No comments: