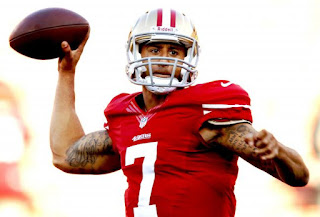 Taking nothing away from the Baltimore Ravens, but the San Fransisco 49ers' coaches made a major blunder in the waning moments of the Super Bowl that gave the advantage to the Ravens' defense with a goal-to-go situation at the 5 yard line.
The NFL and every other level of football is overly obsessed with the shotgun formation.  It certainly has its place at every level, but in short yardage situations and at or inside the five yard line are definitely not the right time or place.
Case in point:  3rd down at the five yard line, Colin Kaepernick tried to throw a slant to his left that was broken up in the end zone.  Ravens' safety Ed Reed got an extra early jump at the line of scrimmage that wasn't called.  If Kaepernick was under center, Reed would have needed to take a left hand turn to get to the QB, but by being in shotgun, he was able to make a beeline right at Kaepernick, who was trying to get a handle on the ball and make an accurate throw.  He would have already had the ball in his hand and been able to make a better throw and had just a split second more time, increasing the odds of a winning touchdown throw.
On 4th down, the Niners took a time-out to think about their last play to either win or lose the game.  After deliberating, they chose an all or nothing fade route to the corner of the end zone.  Fade routes need to get up quickly to give the receiver a chance to catch it over his shoulder as he tiptoes inbounds.  Fades aren't that high a percentage pass to begin with, but to call it from shotgun guaranteed that the ball wouldn't get up quickly enough to be thrown properly.  Did Michael Crabtree get held?  Absolutely, but hoping the referee would call that on the final play was wishful thinking.  If the ball had gotten up earlier from being under center, the ball would have been closer to the ground and would have been much more blatant of a hold and possibly even gotten the call, but the all-or-nothing call was a very poor one to begin with.
When faced with a "win or lose" proposition, it is always a higher percentage chance to go with a multiple receiver set and a run/pass option for the QB, especially an athletic one like Kaepernick.  From the team that created "The Catch", one would think that of all the teams out there, this one would know better than to throw a fade in that situation.
Unfortunately many NFL teams are now using the shotgun in other short yardage and Red Zone situations.  This is a mistake.  The QB cannot get his hand on the ball and complete a pass as quickly as under center and cannot take advantage of missed assignments by the defense by dumping the ball for a quick two yard pick up.  The QB is asked to throw without getting his hand on the laces, increasing an errant throw and cannot get it to the receiver before he goes down the field significantly further and incurring better coverage.
The 49ers may not have completed either of their last two attempts on Super Bowl Sunday, but if they would have stayed under center like they should have, they just might still have a perfect record in those big games!
Posted by Jeff Carlson at 6:07 PM No comments: