Things didn't work out too well the other night for the Dolphins or Ryan Tannehill, last year's first round pick for Miami.  Not to fret, the Dolphins are still 3-1 and Tannehill is only going to get better.  What I really like about him is his overall athleticism and his tight, efficient throwing motion.  He will continue to improve as a QB as he adds snaps to his resume and his mechanics will keep him close to his targets.
Posted by Jeff Carlson at 5:10 PM No comments:

Peyton Manning Out of This World 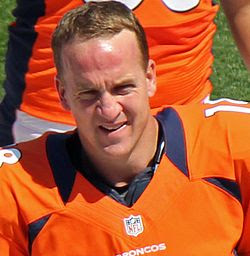 When John Elway jettisoned Tim Tebow for Peyton Manning, who was trying to return from serious neck issues, there were plenty of questions left to be answered.  2012 was a pretty good year for Manning and the Broncos and could have been magical if not for a defensive brain-fart in the AFC Championship game.
Fast forward to 2013 and Manning has taken the new rules of patty-cake treatment for wide receivers catching passes and exploited it to what may turn out to be the most prolific and efficient season on record, which is no easy task.
Through four games, he has a record 16 TD passes and is just making it look to easy.  There really is no answer from the defensive side, other than to beat a lineman and knock him down before he is ready to throw.  But, he has made that very difficult as well by getting rid of the ball quickly and keeping the offense running at a very high tempo and thus keep the defensive linemen tired and frustrated.
If the Broncos offensive linemen can keep Peyton upright all year, John Elway may have made the  managerial move of the century--albeit only 13 years thus far!
Posted by Jeff Carlson at 5:04 PM No comments: