Jaws 14 Years Behind The Times 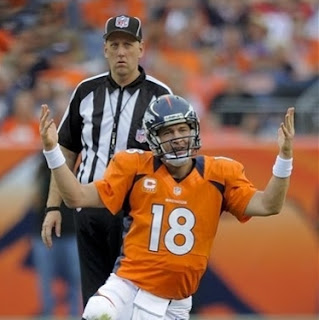 Ron Jaworski has been analyzing NFL play and its players for many years and I have always respected his experience and knowledge.  He even made a list of the top 30 quarterbacks in the league this summer, listing reasons for their rankings based on his study and analysis of each.
Unfortunately, while assessing Peyton Manning's early season struggles with the Denver Broncos and his new offense, he said Peyton hasn't quite returned to form and he knows this because Manning's passes are wobbling a bit.  He said he likes to see a nice tight spiral.  The problem with Jaworski's analysis is that Peyton Manning has been leading the NFL in passing for the last 14 years and has yet to throw a tight spiral.
How could a learned QB critic not possibly know that Peyton Manning does not throw a spiral?  I train a number of little kids and when we start to talk about who to watch for proper mechanics and I say that Eli has better mechanics than Peyton, they almost always light up and say, "Ya, Peyton Manning's ball is wobbly!"  Too bad Jaws doesn't have the careful eye of today's youth.
For those of you that want to know why Peyton Manning does not throw a tight spiral it is because he has too high of an overhead release and is too far forward too early as well.  This is why his right leg comes far off the ground when he throws and leans over his straight left a little too much.  Eli has better weight transfer and stays back longer, balanced between his feet while beginning the throwing motion.
Posted by Jeff Carlson at 9:49 AM No comments:

I have been trying to give the replacement officials the benefit of the doubt in many of the situations that have arisen in this early part of the season, reasoning that officials have always been controversial and always will be, but following the Monday Night debacle all debate is over.
The NFL officially sucks with these replacement officials changing the outcome of football games.
The Green Bay Packers won this game in more ways than one, but the one that matters was on the final play of regulation, where an interception was turned into a touchdown by one of the officials, while the other was signaling touchback.  The biggest travesty is it was upheld on replay and the Seattle Seahawks literally steal a win.  Equally bad was the pass interference call just a few plays before that allowed the Seahawks to overcome a 1st and 38.  The Packers defender did not do anything to the streaking receiver and was flagged for the foul that gave Seattle a first and 10.  I think the reciever/defensive back play has been the most egregious problem for the replacement officials, with no one really knowing what is and what is not pass interference.
The NFL owners replaced the players in 1987, so replacing the officials was a no brainer, but the integrity of the game is now at stake and the owners need to make things move along in negotiations.  It doesn't mean fold your cards and give in, but get the arbitrater to arbitrate and make a deal.  Enough is enough!
Posted by Jeff Carlson at 9:28 AM No comments:

I have watched Doug Flutie's and Kordell Stewart's great hail mary passes for many years, but locked away on an old VHS tape is arguably (not really arguable, this is the best) the best hail mary pass of ALL-TIME (no bias, no sarcasm)!  Now thanks to the iphone, a quick and easy video made from the TV and uploaded to YOUTUBE and now everyone can see for themselves the best game-winner (hard to categorize this laser-guided bomb as a hail mary).
The University of Nevada-Reno (now Nevada) was the #1 ranked team in Division I-AA in 1988 and Weber State was tied at 31-31 with :06 seconds left in the game at their own 43 yard line.  On the last play of the game, quarterback Jeff Carlson rolls out to the left and launches a 70 yard pass to Todd Beightol in the end zone to win the game 37-31.
You be the judge.  Flutie, Stewart or Carlson, who gets your vote for best game-winning toss?
Posted by Jeff Carlson at 9:13 AM No comments: 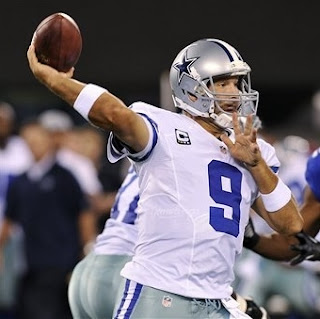 Tony Romo seems like one of the nicer guys and best paid player in pro sports.  He plays QB for "America's Team".  He recently became a husband and even more recently a father.  Romo seemingly has it all and maybe he does, but 2012 may be his last chance to take the Cowboys to the Super Bowl or at least the NFC Championship game or he may just be a quarterback for another team sooner rather than later.
He got Dallas off on the right foot in the NFL's "kickoff" game last Wednesday by beating a inter-division foe in the defending Super Bowl champs.  The next time they play the Giants, I expect a better game from New York, but Romo can do amazing things in the regular season.  His problem has been the playoffs and the Cowboys new stadium is too big and too expensive not to have a team that reaches deep into the playoffs every year.  Cowboys owner Jerry Jones can't charge the big bucks needed to fill all those luxury boxes without great success between the lines on Sundays (well mostly Sundays).
I root for good guys and Tony Romo seems to be one of those good guys.  I hope he takes his current team to the promised land and not start over with another one in another city.
Posted by Jeff Carlson at 8:59 AM No comments: