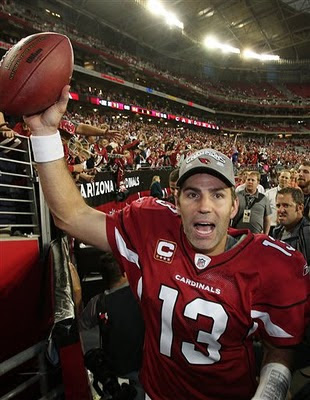 Possibly the biggest surprise story of rags to riches in NFL history is about to come to a close. Sure there have been stories about a kicker picked up from bartending and making a field goal the same week.
But never has there been a story about a quarterback stocking shelves in a grocery store, playing some Arena Football and then becoming the NFL MVP, Super Bowl winner and basically dominating the NFL for more than a decade!
Well, the Kurt Warner charmed-life story is about to close the book on his football glory days after leading the once sad-sack Arizona Cardinals to the Super Bowl last year and back to the playoffs again this year before falling to the Super Bowl bound New Orleans Saints.
If and when Warner says goodbye, don't expect a Brett Favre-like return by fall. Kurt Warner has a lot more than football in his life to keep him off the field for good and feel good about walking away still playing great football.
The Arizona Cardinals will miss him greatly, as they will have to turn to the QB they thought would have been leading them a couple of years ago, but Kurt Warner's play and leadership would not let him on the field. The NFL will also miss what he brought on the field and off!
Posted by Jeff Carlson at 12:01 AM