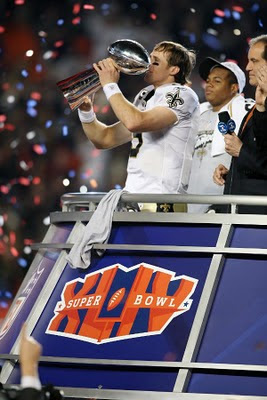 84 passes, 37 runs. Enough said. Super Bowl XLIV was one for the QB's. Peyton Manning owned the first quarter and staked the Colts to a 10-0 lead.
In last year's Super Bowl, the game changed just before halftime with an interception returned 100 yards for a touchdown. The Cardinals almost overcame that potential 14 point swing and if it wasn't for Ben Roethlisberger and Santonio Holmes fantastic play, they would have.
Tonight, the Saints had a 4th down and goal to go before half. Sean Payton went for it and lost, but went for it again to start the second half with an onsides kick and it paid off with needed momentum and kept Manning off the field for an extended period.
Drew Brees was as efficient in the biggest game of all as he was all season, going 32 of 39 for 288 and two TD's. His completions tied Tom Brady's SB record. He won the MVP and cried with his young son in the afterglow of reaching the pinnacle of the football world, both for his family and the family of New Orleans!
Posted by Jeff Carlson at 11:01 PM

Hmmm, all the talk out of Dungy's mouth was about how he can't possibly see how the Colts could lose the SB. When asked about who is better, Manning or Brady, he obviously sided with his QB. How do we get to do an interview with him now? I want to ask him how many SBs Brady has, as well as pick 6's in those SBs compared to Manning.......