"Just Say No" To Kaepernicking 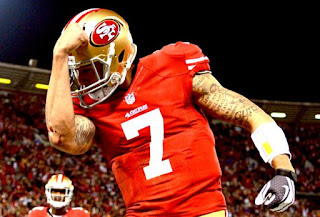 In the great movie "Gladiator", Maximus tells the emperor Commodus that, "The time for honoring yourself will soon be at an end."  The newest form of honoring one's self has been dubbed "Kaepernicking", when you kiss your own bicep after a great play.  Colin Kaepernick has come on like a whirlwind to finish the season in grand fashion and take the NFL by storm with his fantastic runs from the "pistol" offense and some really big throws as well.  He would do well to let others laud his performance and play the humble hero than kiss himself.  Professional players have been self-promoters for a long, long time and NFL players have been pointing to the names on their own backs for a long time as well, but all of these players would do well to learn from Tim Tebow's celebration of bowing in humble reverence to his creator, the One that made it all possible in the first place.  They may not want to follow Tebow's on-field performances, but the rest of his life would be good form!
Posted by Jeff Carlson at 9:30 PM