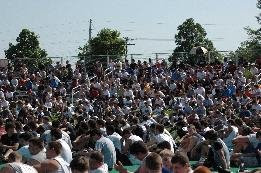 It's that time of year to find a football camp! There are so many choices these days that it is hard to know what you are getting for your money. Let me say that it is a crapshoot and you really are paying for the picture with whatever celebrity or school is sponsoring the camp. I encourage all of my players to go for the life experience and potential exposure (we are minutes from the University of South Florida and two hours from the University of Florida). But realize that you have no idea who will be teaching and what they will be teaching at these camps.
I taught this past Sunday at what may be the most valuable camp in the whole country. It is a charity event called LaurensFirstAndGoal.org. Coach John Loose from Lafayette College runs it in honor of his daughter Lauren who has pediatric brain cancer. Campers pay only a $25 donation for the one day camp, but get coached by college and professional coaches in this high intensity environment. Tampa Bay Buccaneers Head Coach Raheem Morris spoke at the University of South Florida event this year as it went into its second year in Florida. They had over 1700 kids at their Pennsylvania event that has a few years head start!
The biggest thing that I notice on the QB's at any of these group camps where the pace is usually fast. I prefer a slower pace to make sure of proper fundamentals and techniques, but what most QB's miss is the fact that when throwing to their backside (the left side for righthanders) is to look to the left side of the field before just winging it over there with possibly a quick glance. You don't watch your receivers run their routes (you know where they are supposed to go), you watch the most dangerous defender of the area that you are trying to attack with at least two receivers. But, you MUST look in that direction and watch the body language/drop of the defender and throw to the one he doesn't cover. See the area with both eyes, not out of the corner of one. And be attentive, take correction and say yes sir, no sir, it goes a long way.
Posted by Jeff Carlson at 9:51 PM