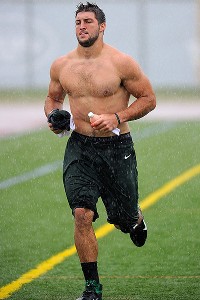 Living in the fishbowl that is the New York media is quite difficult for one of the biggest stars on the planet, just ask Timmy Tebow.  Running without a shirt hasn't been news for thousands of athletes over the years, but when Tebow does it, it becomes a hit viral video.
Beyond the humor of it hides the fact that he has become so big in the upper body and overall, that he really isn't considering himself a prospect to play quarterback in the NFL like any other QB in the league.  His arm swing is very slow and no snap to his delivery.  The decision-making process is obviously still a struggle for him and if you don't have the passing piece or the decision-making piece, bulking up for the running piece may be his best option, but he certainly won't be competing for a starting spot on a team that plays a pro-style system now or in the future, unless he undergoes an "Extreme Tebow Makeover" of his body and mind.http://espn.go.com/video/clip?id=espn:8214271
Posted by Jeff Carlson at 8:14 PM