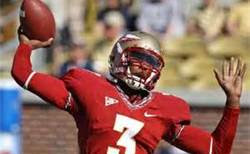 I love compeitions.  That is why I named my company America's Best Quarterback.  I wanted to develop a series of competitions for all QB's (young and old, pro, x-pro and amateur) to compete across the country and see who was the best.  We had a great even a few years ago, but just didn't have the abitlity to grow it the way I had envisioned.
I happened upon a college All-Star competition this afternoon that pitted "teams" against each other.  The NFL prospect QB's (EJ Manuel, Jordan Rodgers, Mike Glennon, Ryan Nassib).  Each of the four had issues dropping a single ball into a large net only 20 yards away and each of them had problems for different mechanical reasons.
EJ Manuel opened his body up to the throw (his chest was facing the target before his started his throwing motion) so that he reach back behind his head too far.  Stay "sqare" to the target with your your front hip and shoulder pointed at the target as long as possible (like a golfer) for the best accuracy.  You can see in the photo that he does this in real football as well.  Opening up like this reduces his accuracy and power.  He seems to have enough natural power, but even though his college completion percentage was very good, in the NFL, this mechanical flaw will haunt him.
Jordan Rodgers completed the task faster than the others, but he too had accuracy issues.  He drops the ball on first movement and then brings the ball behind his head and back, pointing the front end of the ball to the sky, creating an elongated delivery and making it hard to bring the ball back down the target in time.  He should watch his brother's mechanics a lot more closely and mimic those, where Aaron Rogers keeps the front tip of the ball facing the ground much more often by keeping his ball on top of his elbow with a straight wrist (which is the best way to throw).
Mike Glennon embarrassed himself in this meaningless competition.  He threw the ball short of the target many times because he was throwing directly at it and not giving it any loft.  This was an OK strategy as the ball would have gone in the net, but he was short and didn't correct his error.  The reason he was short was because he kept throwing with a stiff left knee.  Like shooting a free throw in basketball with stiff legs, the ball will be very flat.  To get proper trajectory, the shooter should have some bend in the knees, which fixes balance.  QB's should always have bend in their hips and knees.  The front knee bends even more after release and then goes straight after the ball is well out of the QB's hand.
Ryan Nassib had very much the same problem as Jordan Rodgers, but even more so.  He takes the ball so far behind his head he almost touches the ball to his back.  It is very difficult to bring the ball around in time to make consistently accurate throws and when he meets NFL quality competition, he and others that throw like him, will find that they don't have the luxury to take that much time throwing the ball.  These type throwers either get hit while throwing more often than others or decide they can't make the throw and pull the ball down more often, which causes more sacks and broken plays.
Ultimately these manufactured QB competitions don't prove anything about how a player plays when there are 22 guys on the field, but they are fun to watch and do
uncover some mechanical issues for them to improve so that their transition to the next level will give them their best chance at success!