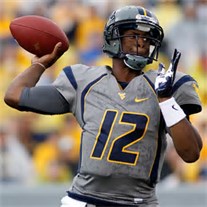 As I wrote before the draft, I didn't really believe any of the 2013 draft class was worthy of a first round pick.  The Buffalo Bills selection of Florida State's EJ Manuel in the middle of the round caught many by surprise, including me.  I wrote for JoeBucsFan.com that Manuel might be a good option for the Tampa Bay Buccaneers in the third or fourth round, after Oklahoma's Landry Jones.  I based that opinion on mechanics.  Jones has solid mechanics, maybe the best in the draft, while Manuel is inconsistent with his.  Manuel has a bigger upside, probably the biggest in the draft and that is why the Bills reached a little bit with the former Seminole signal-caller.
Geno Smith became this year's Dan Marino/Aaron Rogers, though both Marino and Rogers were actual possibilities to go early in the first round and fell.  It sounds as if Geno Smith was being misled into believing that he was not only first round worth, but early first round.  I didn't see it, as you can read in an earlier posting right here at AmericasBestQB.com, and neither did any of the 32 NFL football clubs.  After publicly saying he wasn't going to stay in New York for Day 2 of the draft, someone talked some sense into him and he stayed for the New York Jets to get some photo ops on the big stage as they picked him up with the 39th pick, an appropriate landing spot and the best place he could go for an early opportunity to take over!
The Tampa Bay Buccaneers made a relatively surprising 3rd round pick of North Carolina State's Mike Glennon.  The tallest QB in the draft is slightly bigger than Bucs starter Josh Freeman and while he shouldn't push for playing time this year, if Freeman falters in his contract year, Glennon may get a prime shot to take over in Tampa in 2014!
USC's Matt Barkley probably didn't think he would last as long as he did, falling to the fourth round and the Philadelphia Eagles.  I think Barkley could end up a solid starter in the league, but doubt that he will ever achieve greatness.  The New York Giants added Syracuse's Ryan Nassib, thought to possibly go to his college coach's Buffalo Bills, but he will get a chance to learn behind Eli Manning, a pretty nice place to be.
The Pittsburgh Steelers picked up the aforementioned Landry Jones, where he will be given the proper development time to start fighting Big Ben Roethlisberger in a couple years, the way it should be done.
Overall, this year's average crop of slingers fell into some pretty good situations for success in the coming years.  Geno Smith may not be too happy about what he has gotten himself into or how early he will be getting booed in New York, as I'm sure Mark Sanchez is still surprised how fast the wheels have fallen off of his career that looked so bright not too long ago.
Posted by Jeff Carlson at 9:16 PM