NFL Combine and the Quarterback 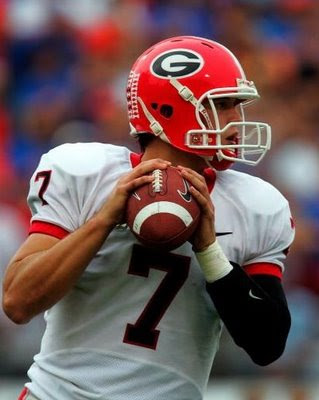 I went to the NFL Combine in 1989 to show my skills to the powers-that-be in the NFL. I roomed with Troy Aikman who came to get a physical and go home. The combine has grown in popularity over the years and access from a fan's standpoint has increased incredibly. It was top-secret stuff back in the day. Getting to see someone's film to see the drills that they did was Iron Curtain stuff (that is an old reference to the Russia during the Cold War).
Matt Stafford is thought to be the top QB in this year's draft and is not going to be participating in the on-field throwing, running, etc. Hearing executives say things about being scared to compete with the other participants is not the issue for most, I would guess. The issue is that everything is graded and examined and throwing to unknown receivers that you aren't familiar with is not easy and could cost a kid millions. Guys like me that are from small schools and trying to establish themselves have nothing to lose and everything to gain. Matt Stafford, like Troy Aikman and every other top prospect since, should control their environment to guarantee the best showing possible. Not throwing at the 1989 combine didn't drop Aikman's status as his contract was negotiated before the draft began and he was the #1 pick and now in the Pro Football Hall Of Fame. I don't think Matt Stafford is worthy of the #1 overall pick, but he is certainly making the right decision not to participate in February in Indianapolis, Indiana.
Posted by Jeff Carlson at 9:18 AM