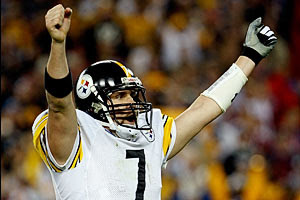 Great quarterbacks come in lots of shapes and sizes. Big Ben Roethlisberger comes by his name honestly. He is tough to bring down because he is so big and just agile enough to keep alive in the pocket to make plays out of nothing. He did that time and again last night in Tampa. Roethlisberger didn't win the MVP, which he deserved as much as Holmes, but he put himself into a very elite category with another Lombardi Trohpy in his case. He also put himself into Super Bowl lore with a two-minute drive that won the game!
Ben Roethlisberger fits in Pittsburgh better than any other QB fits the persona of his team's town, even better than Favre in Green Bay. Ben doesn't get it done in a pretty fashion, his blue collar style is the epitome of the Pittsburgh Steelers.
Posted by Jeff Carlson at 9:19 AM