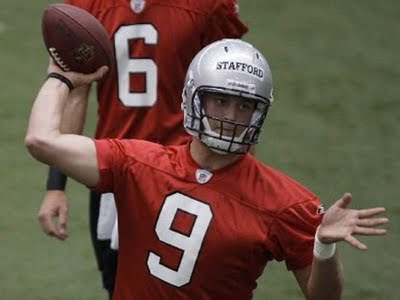 You know what they call a 4th round pick with 1 TD and 4 interceptions (30-55 completions/attempts) in preseason? Unemployed.
You know what they call you if you are the first pick in the NFL draft with the same stats? Starter!
Matthew Stafford was just named the Detroit Lions' starting QB for the 2009 season. This really comes as no surprise as Daunte Culpepper didn't make much difference in last year's march to the record books (0-16). And with the economy, etc. of Michigan, the Lions need some new blood in the lineup to get some new blood in the seats come the regular season.
I expect Stafford to be a pretty solid player and maybe one day a star, but it is funny how players earn their playing time sometimes based solely on their draft status, even though the coaches will always sell the concept of "whatever gives us the best chance of winning".
Posted by Jeff Carlson at 5:43 PM